When I put up that picture of my Seiko Dive watch in my previous post the other day, I got to thinking that I should do a quick write-up on this watch, plus the other two Seikos that I have.

Having read Rob Bowker's nice post about his own Seiko wristwatch;

...I felt inspired to write about my own Seiko wristwatches. I'm already working on another sprawling review of a different watch, but thought it might be an idea to get back into watch-writing mode by writing about these fantastic watches from Japan. 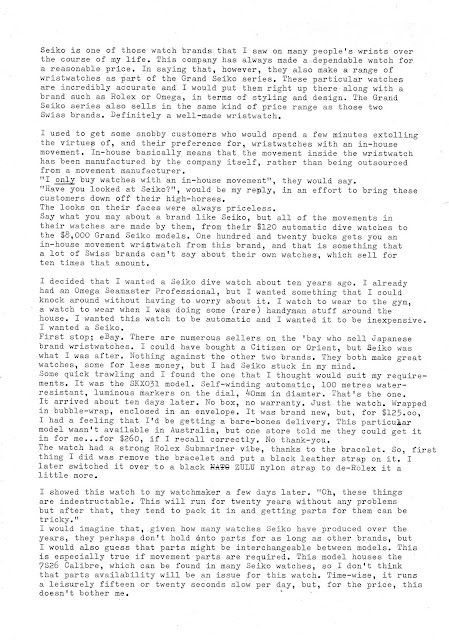 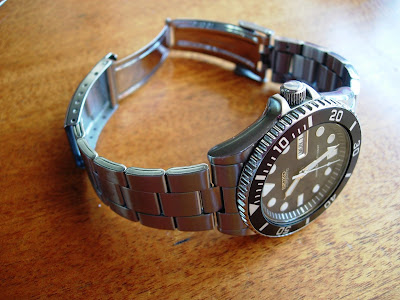 Up above is how it looked when it arrived. Definitely has plenty of Seiko DNA in its design, but the three-link bracelet was a little too Rolexy for my liking (with this watch, anyway), so out came the tools and off came the bracelet.
Here's the Oyster bracelet, as equipped on a Rolex Submariner; 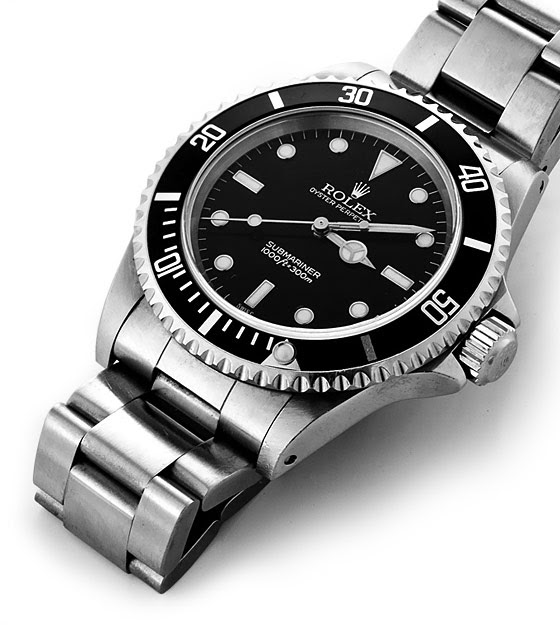 picture courtesy of Valet.com- Anatomy of a Classic; The Rolex Submariner 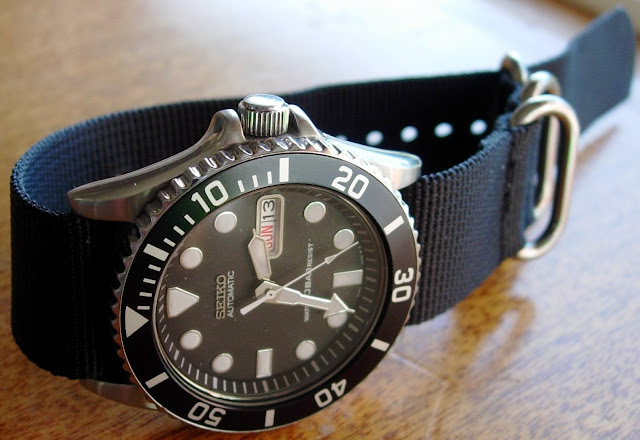 Just quickly, ZULU straps are basically the US military's version of the British Ministry of Defence-approved NATO strap. The main difference is the shape of the hardware. The ZULUs have oval-shaped rings, whereas the NATOs will have rectangular fittings. 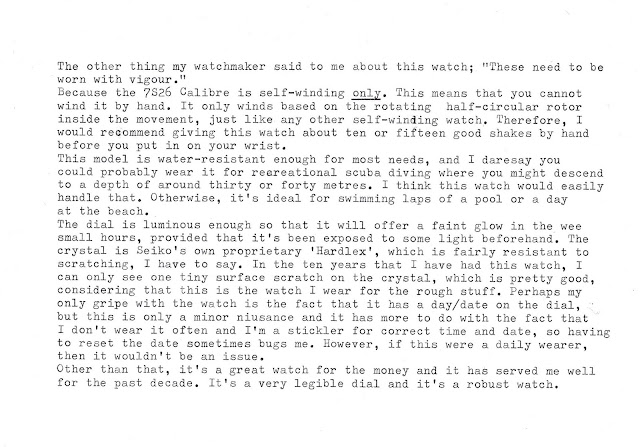 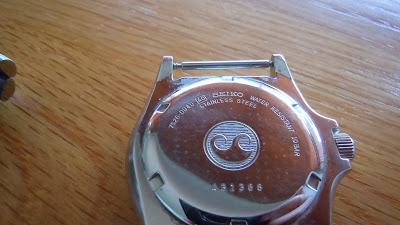 If you want to read about the Grand Seiko series, follow this link to a recent article about the newly-released 44GS model;
Redefining A Classic- Introducing The New Grand Seiko 44GS﻿
About six or seven years ago, I saw another Seiko model that looked really cool. Its design was very much made up of sharp, straight lines and there was a nice attention to detail throughout this watch. It was known as the Seiko Prospex Air Diver Titanium 200 (Model No. SBDA003), but collectors soon began referring to it as The Seiko Samurai. 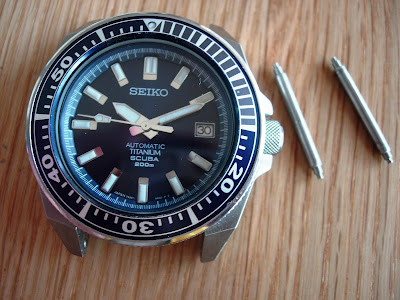 A very angular design, it looks like it would be perfectly at home on some Japanese Anime character's wrist in the year 2072. 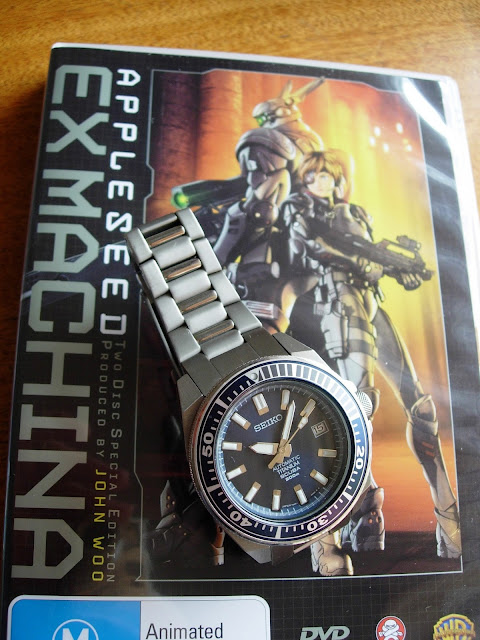 And because the case and bracelet are made of titanium, it makes for a very light watch to wear. 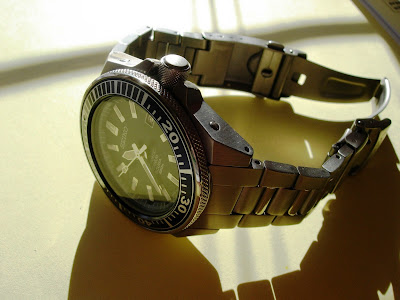 And this watch shows some nice attention to detail on Seiko's part. The dial is nicely legible and luminous in low-light. The bezel edge and winding crown are knurled for easy gripping with wet or dry hands. Looking closely at the chapter ring (that's the ring on the outer edge of the dial), you notice that the hour marker batons tuck slightly into these little notches cut into the chapter ring. It's a nice little touch. ﻿ 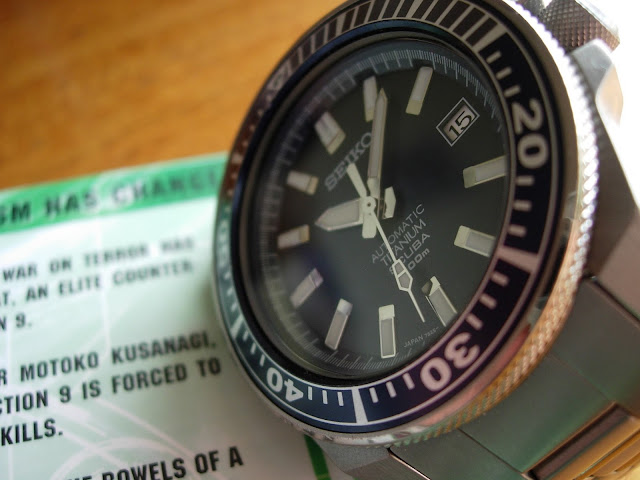 ﻿
The movement inside this watch is the Calibre 7S25. It's similar to the movement inside the Seiko SKX031 model mentioned above, but this Samurai model shows the date only. Timekeeping is, once again, a little fluid.
This Samurai series was only in production for a few short years and, as a result, there is some demand amongst collectors for these watches.
And, of course, now that I know this, I rarely wear it.
Once you begin reading up about Seiko dive watches, you will invariably land on the 7002 models that were produced throughout the '80s and '90s. (Don't quote me on the veracity of that sentence. I'm talking in ball-park terms, since I'm no expert on vintage Seiko). Their design harks back to models from the 1970s and they are instantly recognisable by many with an interest in wristwatches due to the crown placement on the case.
Since my taste in wristwatches leans towards classic models, I began looking at these on eBay and found a slew of them for sale. They are readily available. At the time of writing, a quick search for a 7002 brings up almost 300 listings for watches and spare parts.
Since I already had two Seiko dive watches, I had a pretty strict criteria for my next one; it had to be cheap. I was planning to modify this watch, so I didn't want to spend too much. As luck would have it, I got one off eBay for $40 bucks. Not too shabby. I read around on some Seiko watch forums and was told that modifying these old dive watches could indeed be a slippery slope. I bought two new dials for it, as well as a new set of hands.
Here's how it looked shortly after it arrived. According to the seller, the serial number dates this watch back to around May, 1993, so it's already 20 years old now.
I wanted to change the hands because they were exactly the same as what I had on my other Seiko Diver. 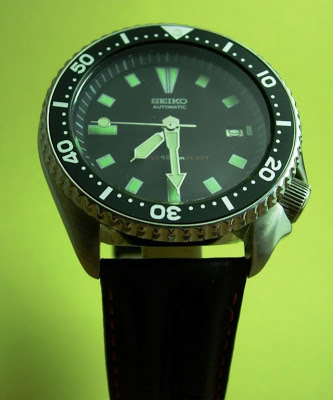 This watch houses the 7000 series movement. It was produced cheaply throughout the 80s and 90s and, while it doesn't command the same respect as the previous 6309 Calibre, it is still a work-horse movement. My one loses around two minutes a day, but some slight tinkering could bring that down a little. However, this isn't something that bothers me with this watch. It's a leisure-time watch, so if it's out by a couple of minutes, it's no big deal.
I had decided to make modifications to this watch because I was going for a certain look. The IWC Aquatimer Chronograph had just been released...

...and I liked the colour combo of blue and orange. So, I got onto eBay and snagged these two dials and swapped around the chapter rings...

...with the intention of using the blue dial and the orange ring. While it wasn't the same shade of blue as the IWC, it would do nicely.
Of course, this was not enough. I wanted this watch to have different hands as well, since the ones on it were the same design as my first Seiko diver. I was also wanting to mimic a classic Tudor dive watch design from the Sixties and Seventies, the famous, and highly sought-after Tudor 'Snowflake' Submariner... 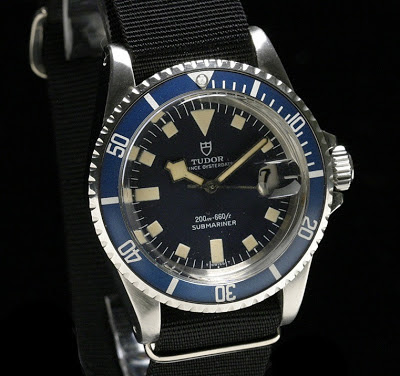 Picture courtesy of...actually, I got this picture off the web so long ago that I don't remember where it came from.
The Tudor Prince OysterDate Submariner watch above was French military-issue back in the early 1970s. If you ever see a blue-dialled model with this style of hands, grab it! It ain't cheap, but it's rare.
It was nicknamed the 'Snowflake' due to the little square design on the hour hand.
Okay, the hands arrived, so I took them, the dials and the watch to my watchmaker for the necessary swap-over.
And this was the end-result; 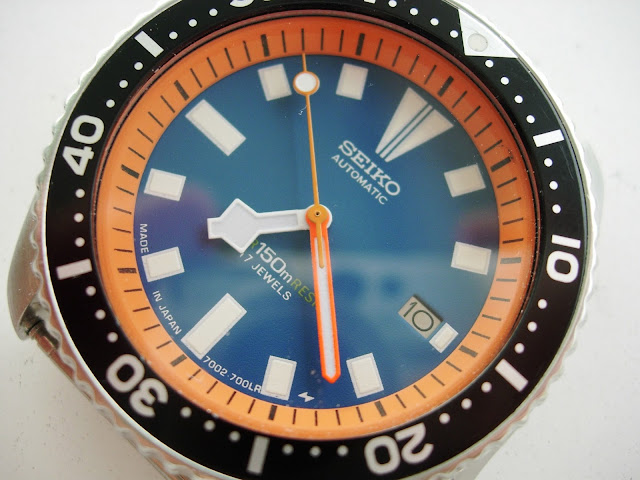 ﻿
I opted for an orange minute hand, since it was a common practice for watch manufacturers to use orange for the minute hand to help differentiate it from the hour hand for diving purposes. And, once it was done, I put it on this strap, and I consider this to be the biggest mistake that I made; 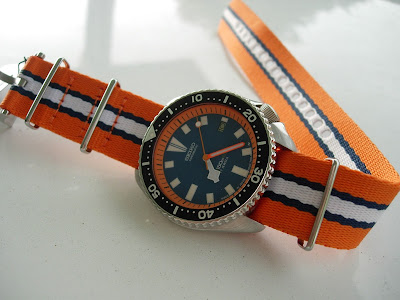 I got this NATO strap from Fossil. Notice the rectangular hardware instead of oval-shaped rings as found on ZULU straps. It's well made and all, and the colours match the watch nicely, but it just...uh...'Tommy Hilfigers' it up a little too much.
Stupidly, I took it back to the watchmaker and had the black dial put back on, leaving the hands in place. What I should have done is remove the strap...and burned it. It's not a huge drama, since I can have the blue dial put back on, especially now that I have since purchased a Seiko steel bracelet for it. It would look quite neat on the bracelet.
Ahh, well, I'll get around to it someday.  I spent more on the modification parts than I did on the actual watch.
The Seiko collectors told me that would happen.
Seiko make great watches, without a doubt. Of the Japanese brands, I consider them to be the best, and when this company pulls out all stops, it manufactures a watch that gives many a Swiss brand a run for its money. Their watches can be had for as little as $80 or $90 for a plain dialled quartz watch that will be a dependable timekeeper. A quick search on eBay shows a few Seiko 5 Series automatic models selling for under $70, with many of them under a hundred dollars. They are a great value brand of wristwatch and cheap enough that one could amass a small collection of them without trying too hard or breaking the bank.
I have to hand it to the Seiko brand for its ability to create a wide range of wristwatches in many different styles and price points. This helps ensure that wristwatches remain both affordable and accessible.
Thanks for reading!