In our last thrilling episode, I had a slight mishap that required me to go to hospital, just to play it safe. They sorted it out, gave me some antibiotics and scheduled an appointment for me to come back a week later for follow-up.

Well, today (Monday) was a week later and off I went. The cab driver got me to the hospital with time to spare. Man, I've caught more cabs in the last three weeks than I did throughout the '90s! I owned a 1970 Mercedes-Benz 280S (manual!) that spent more time on my mechanic's hoist than it did at the kerb outside my house.

I shuffled to the reception desk, confirmed my details, then parked myself in the pretty crowded waiting room. They called out my name ten minutes later. Impressive. I thought I'd be sitting there an hour or more. I approached a nearby corridor and was directed towards Room 4. I made my way in there and was seen by one of the surgeons who assisted with the operation three weeks ago. That was good. I thanked him later on and I asked him to pass on my thanks to the others who were part of the surgical team, assuming he sees them again anytime soon.

Once up on the examination table, he removed the adhesive bandage that was covering the wound. I gently gripped my calf, expecting to feel a little pain as the bandage peeled away, but it came off without any resistance.

I thought the wound still looked a tad shoddy, but the doctor seemed happy with how it was progressing. He placed a thumb on either side of the wound. I cringed. He gently pressed down with his thumbs. I didn't feel any pain.

"It's looking okay. It might heal a little rough, or that could just be some tissue that will flake off as it heals", he said.

"So it might scar a little more noticeably? I can live with that", I replied, almost adding Chicks dig scars!

He put a small patch of absorbent gauze over the wound and then a rectangular patch of clear adhesive. This was a waterproof bandage and I was instructed to leave it on for a week or so. 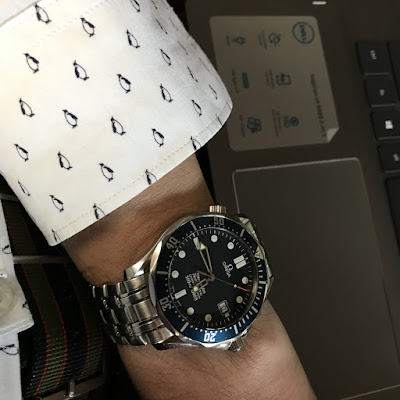 Oh yeah, the wristwatch I had on. One that I haven't worn much in recent years. The classic Omega watch which will celebrate its 30th year of production next year, the Seamaster Professional 300m. I don't wear it as often as I used to, but whenever I do, I'm reminded instantly of what a well-made watch it is.

And so, this follow-up consultation drew to a close. I put my cam-shoe back on, thanked him again, and made my way out of there.

About an hour after I got home, I was reaching for a box of tissues located on the bottom shelf of the bathroom cabinet and I heard my shirt rip. Yes, the shirt in this photo. The one with the penguins on it. I must have put a strain on the fabric. Either that or my massive rippling biceps were just too damn big for this shirt. A closer inspection showed a long tear along the seam of the armpit. Irreparable. Time to say goodbye to it.

I didn't bother changing shirts. I wasn't going anywhere else today. I put on a chore jacket and settled myself at the end of the kitchen table. After cranking up my work laptop, I made myself a latté and then sat down and began going through some emails  and repair quotations that had come in over the weekend. I had one foot propped up on one chair on my right, and my other foot resting on a chair to my left.

Wait and see. No point worrying about it for now.