So, it was now almost three weeks since I'd had the bunion operation and the feet seemed to be healing okay. I was taking an aspirin a day, to deal with potential blood clots, a calcium tablet, to help with bone healing, and a Vitamin C supplement, to assist with the wound healing.

It was Tuesday morning, October 4th, around ten am, and I was going to take a shower. I had taken off the cam-shoes and I was gingerly standing in the en-suite bathroom, which is about 2 and-a-half feet wide by about six feet in length. Basically, a shower cubicle one one side, a vanity basin in the middle, and a toilet at the opposite wall. 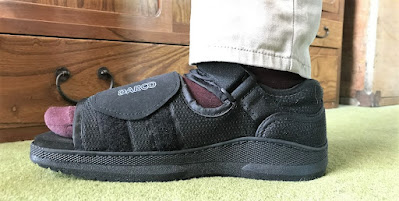 The cam shoe is like a sandal. The Velcro fastenings lift away completely so that you can put your foot into the shoe from above. The inner sole of the shoe is a flat neoprene rubber which does not bend at all. It's designed to keep the foot and toes on a flat surface so that the toes don't bend or flex. These shoes are quite bulky, so they need to be removed prior to putting on or taking off trousers.
Anyway, I was going to remove the thin adhesive bandage that was applied after the stitches were removed five days earlier (see previous post).
I crouched down to pick something up off the floor and felt an unpleasant tightness in my left foot where the stitches had been. I noticed also that I had lifted my left heel off the floor. These cam shoes are designed to distribute your weight and balance towards the heel, thus preventing any pressure on the toes, but I had lifted the heel. I straightened up and took the two steps out of the en suite and sat down on the edge of the bed.
Slowly, I peeled away the bandage and saw the wound had opened up a little. No blood, but it didn't look great, either. I removed the bandage from the other foot. That one looked okay. I took a shower and then got out and gingerly dried off the wounds. I then placed some non-adhesive gauze pads on both of them and wrapped a light bandage around them.
The left foot gave me some sporadic bursts of light pain for the rest of the day.
By the time my wife got home from work, at around 5:30, I had already decided to go to the hospital to have the wound checked out, just in case. I told her I'd take a cab, knowing how that would go down with her.
Within a few minutes, I was in her car and we were headed for the hospital. We got there a few minutes before six pm and the Emergency Department was doing a brisk trade on this seemingly quiet Tuesday evening.
After explaining my situation to the nurse behind the reception desk, she explained that, since I'd had the procedure done there a couple of weeks ago, she try to rush me through a little faster.
She asked me how bad was the pain, on a scale of 1 to 10? I told her it was around 4.
I suggested to my wife that she leave, as she had brought me here straight after getting home from work and she hadn't eaten yet. She told me to give her a call once I was done and she would come back to pick me up.
I was seen to about 90 minutes later. I apologised to the nurse who was dealing with me initially. I felt like I was wasting their time. She said better to be safe than sorry. Made sense. If there was any infection starting, the wise thing to do would be to deal with it sooner rather than later.
She checked out the wounds and said she'd get a doctor. I was escorted to another room and got myself gingerly onto the examination table.
I have to say, if I haven't said it already, that every one of the doctors and nurses that I've dealt with so far have been wonderful. One or two of the reception staff could do with some customer service training, but for the most part, they've all been great.
The doctor came in and had a look at the wound while I explained how I thought it may have happened.  He made a quick call to one of the Orthopaedic specialists, who turned up five minutes later. He had a look at the feet and prescribed a 7-day course of antibiotics and a fresh dressing. Then he bid me farewell and left. 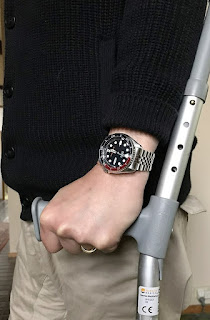 Okay, this post needs another picture. I wore the Seiko SKX009J that day. Sleeping has been a little difficult, as my feet are propped up on a cushion under the covers at the end of the bed. It's a very tight fit, and moving my feet is awkward. As a result, I'm finding that I only move the position of my feet two or three times overnight and my lower back is certainly feeling it. I asked about this sleeping arrangement and was told to keep my feet elevated as much as possible. I have been doing so, but as I write this (on Sunday October 9th), I wonder if I still need to keep them elevated above the level of my heart, as I was instructed to do at the outset.
Toes above nose is what they told me after the operation and I made sure that my feet were level with my face whenever I was lying down.
Although, when I go back in a week for the follow-up, I'll ask again with regard to how elevated my feet need to be.
The nurse started cleaning the wounds and patted them dry while the original doctor typed up his brief report and scheduled an appointment for me to return in a week to have them assessed again. Then he said his goodbyes and left also.
The nurse deftly cut out a patch of thin adhesive gauze, like the one I had on the wounds originally and then she trimmed the corners so that these patches were a soft rectangle. For the open wound, she applied a small strip of gauze, like those little band-aids they use in boxing movies, to close up an open cut. Then a small patch of padded gauze on top, followed by the thin adhesive patch to hold it in place. I was told not to get this wet. Over on the right foot, three small strips of gauze and then the adhesive patch on top. My feet looked like they'd been through the wars. Dry and rough patches of skin, as well as the light bruising near the bandaged areas. As soon as I'd be able to, I'd give them a thorough cleansing, and maybe some moisturiser, to get the skin a little more supple while they recover.
Once the nurse had completed her sterling work, I was good to go. She said goodbye and left, to go and attend to the next patient, and I strapped my cam shoes back on and left the room. I made my way past the reception desk, wanting to thank the ladies there, but they were busy dealing with new arrivals.
I got a text message from my wife as I was heading for the door. I replied, telling her that I had just finished up and she responded, saying that she would be on her way shortly. It was around 8:20pm.
I sat down at a bench outside in the cool Spring air and waited. With my feet elevated.
Thanks for reading!
Posted by teeritz at 23:52