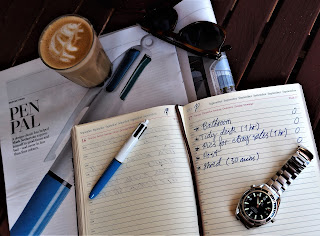 Well, gang, here we are, last day of the month, and it seems that life has gotten too busy for me to do weekly posts. Try as I might, I just don't seem to have the energy or time to sit down on a Friday evening to hammer out one of these posts.
I might try creating a new post on the Monday night and leaving it as a draft that I can add to each night for fifteen minutes or so. Maybe this way, I'll have something worth posting on the Friday or Saturday.
Anyway, Spring has slowly begun to blossom here in Melbourne and we've had a few sunny days here and there. I decided to wear the Omega Seamaster Planet Ocean, since it has been some time since I last wore it. I immediately noticed that it looked a little larger on my wrist than it did the last time I wore it. I'm pretty certain that I've lost a little weight or muscle (such as I have) since the beginning of this year.
Most of my wristwatches tend to feel just a tad looser on the wrist than they did a year ago. Now, you may know that you can't beef up your wrists by exercising or weight training, but you can thicken the forearms a little. 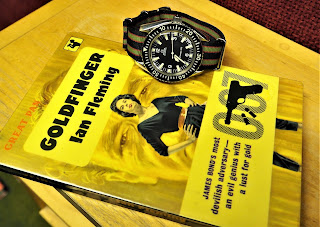 I briefly wore the Omega Seamaster 300 on a TrueBond NATO strap. I've managed to accumulate quite a number of NATO straps over the years and they're all in unworn condition. Might be time to leave one on a watch and really put it through its paces. Thin out the collection a little.
A lot of watch collectors don't like NATO straps. Their argument being that why would you put a cheap, ten dollar strap on an expensive wristwatch? My answer is that a cheap, ten dollar strap takes away some of the pretentiousness associated with an expensive wristwatch. Not only that, but these cheap nylon straps are also one of the most secure methods for keeping the watch on your wrist if one of the spring-bars come off. 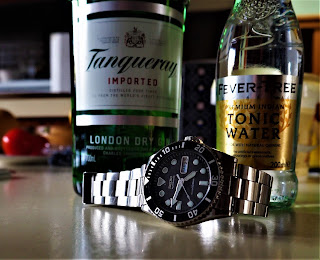 As the weather slowly begins to warm up now that spring is here in Melbourne, I begin thinking about gin and tonics. The cupboard was a little bare, that half-bottle of Bombay Sapphire that I bought in Rome a year ago is empty and now sits on the bookshelf in front of a stack of Jim Thompson noir fiction paperbacks.
I hit one of the larger liquor chains and got a bottle of Tanqueray and some tonic water. I wore the Seiko SKX031. I bought this one back in 2002 for around a hundred bucks. I wore it from time to time for garden work, workouts at the gym, and other handyman jobs around the house. This would explain why it's still in pretty good condition. The bezel has seized up a little and is very hard to turn, but maybe all it needs is a rinse under some warm water.

In health news, I took delivery of a pair of multi-focals a couple of weeks ago. At the tender age of 51, I have now reached the point where I need glasses to see the computer screen clearly at work. I've been in this job for the last 18 months and it's the first job I've had where I stare at a computer screen for such a large part of the day.
The optometrist told me to start off by wearing them for about two hours of the day, but the job is just too busy. Should take a couple more weeks to settle in, I suppose.

Started going to a physiotherapist too. I've been feeling some sharp pains in my right shoulder blade. Felt like an arrow was stuck in it.
He told me that my spine is a mess and gave me a series of exercises that didn't involve Pilates. Good! That was week one.
The second week involved something called dry needling. This treatment uses an acupuncture needle, but rather than being left in, it is pushed in and out for a few seconds, causing the muscle around it to spasm slightly. It's a very strange sensation as you feel a dull ache for a few moments as the muscle contracts reflexively.
The physio told me that I might have a good sleep that night as a result of this treatment. He wasn't wrong.
I'm not sure how long this treatment will take, but I'm looking forward to getting a better range of movement. It was getting to the point where I couldn't turn my head to check for traffic while driving, without wincing in pain. Reversing out of the driveway every morning was becoming excruciating. Something had to be done. 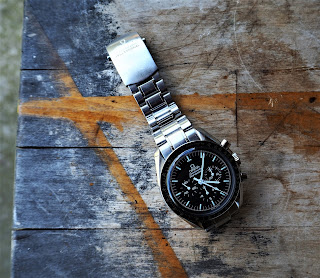 I wore the Omega Speedmaster Professional at some point since my last post. This is an old photo, but I like the lighting in it, and the timber bench-top has aged nicely, with the help of some varnish streaks.
Photo taken in subdued lighting in the afternoon. What professional photographers call 'Golden Hour'.
Not a perfect photo, I'm sure. The silver sections of the bracelet and clasp look a little washed out, but it's perhaps better than most of my efforts.
Which is why I tend to adopt the view these days that 'lighting is everything' when it comes to taking a decent picture. 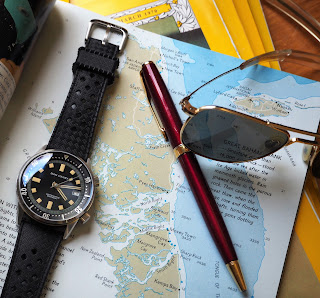 I read about this watch here on the right a few weeks ago. Its design is based on the compressor-style dive watches of the 1960s and '70s. These watches featured an internal rotating bezel which was operated by a second crown, usually positioned at the 2 o'clock edge of the dial.
The brand is called Dan Henry. Mr Henry himself is a watch collector with a phenomenal collection of pieces which date back to 1900. He has them listed on this website;


Dan Henry decided to make his own small collection of watches based on classic designs of the past and this is his latest model, known as the 1970, for the year of the design on which it's based. There was a 44mm model released some time ago, but Dan Henry had always felt that it was too large. So, he's released a newer version in a sober 40mm diameter, which is fine by me.
As soon as I read that it was forty mil, this brand had my attention. Under the bonnet beats an automatic Seiko NH35 movement inside a 200m water-resistant case with a sapphire crystal.
And the price was another deciding factor; $250USD, with free shipping to Australia. Sold!
It arrived four days ago and I've been wearing it since. It's a great size on my wrist.

Well, another week down. I got a dinner date with my wife next week, to celebrate our 21st Wedding Anniversary.
Should be a very pleasant evening.

Okay, so the weekend's half over where I am. I hope you've had a good one so far, folks.

Thanks for reading!
Posted by teeritz at 03:23