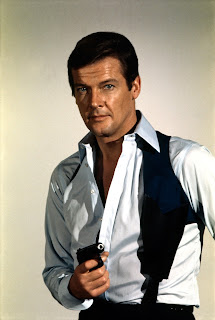 At around 10:45pm (AEST) on Tuesday evening, I crawled into bed and did a quick check of the web on my iPod Touch. I tapped the tile for the BBC News app. A few seconds later;
"Oh no! No!...Roger Moore died", I exclaimed.

Regular readers of this blog may know that I became a Bond fan as a kid in the mid '70s when  I went to see a Live And Let Die and The Man With The Golden Gun double-bill on a summer's Sunday afternoon with my dad and my brother.
I thought this English secret agent was super-cool, with his nifty gadgets (loved his Rolex wristwatch), snappy one-liners and exotic missions. I took it all very seriously.
As I got older, I watched Moore in his earlier roles in the 1960s TV series The Saint and his later show, The Persuaders, which co-starred Tony Curtis.
And, due to his success as Bond, Moore made a slew of other films throughout the '70s and '80s, such as Gold!, Shout At The Devil, That Lucky Touch, The Wild Geese, Crossplot, Escape To Athena, and The Cannonball Run (in which he played a fellow named Seymour Goldfarb Jr who thinks he's Roger Moore). 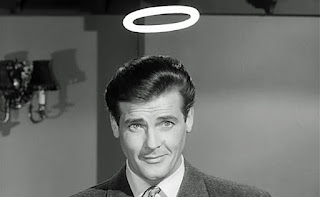 I really liked Moore as Simon Templar, the gentleman adventurer/thief who stole from the rich and got caught up in various adventures. He drove a cool car (a Volvo P1800) and had a sharp hairstyle. He never killed anyone and I don't think he ever kissed anybody either. He was The Saint, after all.

As I caught up with the Connery Bond films and read the Ian Fleming novels, I soon began to realise that Roger Moore's take on 007 was a lot more light-hearted than the earlier films and the books. But this was the 1970s. The era of the Carry On movies, Dick Emery and Benny Hill. His Bond was the one that the era demanded.
But I took my Bonds seriously, remember? Sean Connery became the Bond that I liked because his was closer to the books.

However, I will always have a soft-spot for Mr Moore. He was always an amusing talk-show guest. And the last few days have shown a host of celebrities and fellow actors who have had nice things to say about him.

This story here has gone viral in recent days;

My mother liked him, too. She referred to him as 'the man who throws punches' before she learned his name and pronounced it 'Rodge Maw' in her Italian accented English. 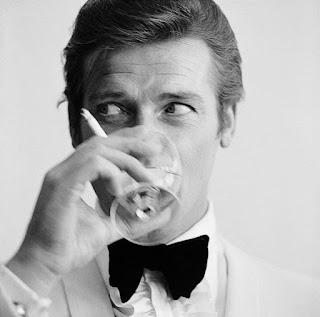 Roger Moore was born in August 1927 and died earlier this week after a short battle with cancer.

I feel as though a part of my own personal history is gone. Inevitable, I guess. Nobody lives forever, after all, but I feel a certain 'hollowness' this week. A hero of mine has died.

Moore played Bond lighter than I would have liked as I got older, but he kept the Bond film franchise cranking for over a decade. In lesser hands, the franchise might have fizzled out sometime around 1980. Also, I can recall numerous moments from my teen years when I would make a comment with a raised eyebrow and an innocent expression. It would appear that Mr Moore had a greater effect on me than I thought.
Moore was the Bond that I first saw on-screen. The poster for Live And Let Die hangs on my lounge room wall, a perfect example of guns, girls, car chases and Bond's cool demeanour. And, as I mentioned, he was a great talk-show guest, never taking himself or his industry too seriously.

And so, I raise a glass to Roger Moore.
Thank-you for services rendered, Sir. Your work and your very being has brought me much pleasure.