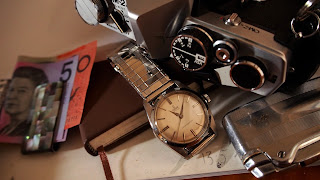 I was still wearing the Tudor hand-wound, on an expanding bracelet, last weekend. I must admit that I do like this look. Reminds me of the men of my Dad's generation. Uncles and family friends that I knew when I was a kid back in the '70s. There's a certain simplicity and ingenuity in the design of these bracelets. Perhaps the most famous brand would be Speidel, but there was a time back in the 1950s and '60s when other brands such as Kingsway and Jacobi-Bender Champion made these.
Once adjusted to your wrist size, they are very comfortable. The Speidel one up above was an absolute dog to adjust, and I think a might have lost some of the microscopic hooks that hold the links together when I last re-sized the bracelet. No matter. I've got two more of them coming from eBay.


Can't remember the last movie I saw at the cinema. Oh, wait a sec, yes I can. It was La La Land, sometime back in February. I had planned to catch a few more movies, but life got in the way.
Went to see Guardians of the Galaxy Vol. II last weekend. The cinema that we saw it in was very, very small. Twelve rows, but they still managed to charge us full price for the tickets. The dogs.
I wore a blast from the past, the Hamilton Khaki Officer's Mechanical; 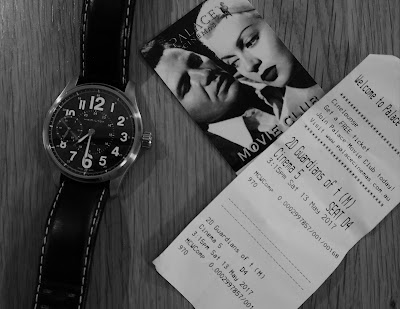 Is it just me, or do modern movie tickets look crappy to you, too? Thermal-printed tickets mean that, if you wanted to keep it as a memento, you'd wind up with a little blank piece of paper in a few months.

The film was good. Chris Pratt is carving out a nice career for himself. I read rumours that he could be playing Indiana Jones in a reboot which, personally, I would rather see than Harrison Ford don the fedora again at his age. The last Indy movie, Indiana Jones and The Kingdom of The Crystal Skull (2008) wasn't bad, but Spielberg and Co really did wait a little too long after Indiana Jones and The Last Crusade in 1989.

Okay, maybe I'm running out of steam this week. Or maybe that third glass of red just kicked in.

Switched over to the Omega Seamaster 300 mid-week; 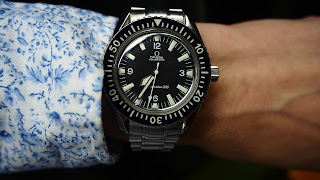 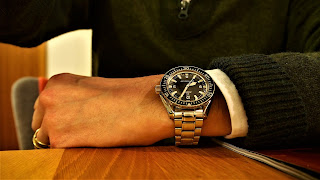 Switched back to the Tudor for work today. I dressed a little sharper, in a never-ending battle against Casual Fridays; 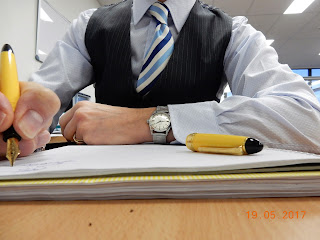 Later in the day, I asked the watchmaker about the clicking sound that my watch makes whenever it's wound. I thought there might be a chipped cog somewhere to do with the winding mechanism or crown. He opened up the case-back and had a look inside.  He then told me that he'd take a crack at repairing it early next week. Said he had a bunch of parts for this movement (ETA Cal. 1080) and could get it working smoother. So, there I was, without a watch on my wrist and beginning to feel antsy.

However, I learned a long, long time ago to always have an escape route, a Plan B, a back-up plan. Sure, here I am, working for a wristwatch brand, but it's not like I can just grab something out of our stock and just put it on my wrist.

So I made my way to the car-park and grabbed my 'Q Branch' kit out of the glove-box of my car. Aside from the nail clippers, head-ache tablets, USB stick, Burt's Bees lip balm, BIC lighter, sugar sachets, Swiss Card, Band-Aids, etc, etc, there is also a mechanical wristwatch on a Waterborne NATO strap; 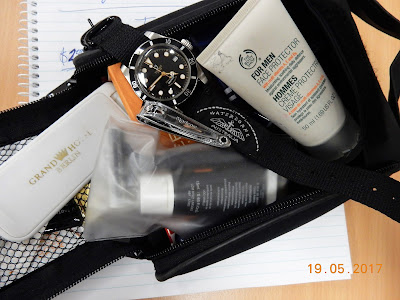 This was a moment-of-weakness eBay purchase from a few years ago. It's a Trident (yes, a bullshit brand that some guy came up with), a 1950s Rolex Submariner 'homage'- and I'm being very generous with that term- that is flimsy and cheap-assed in so many ways that I would use up the rest of the internet describing everything that's wrong with it.
But, it does have a Swiss ETA movement in it. And I just needed it to keep ticking for the next two and a half hours or so until I got home.

It would do. Not nicely, but it would do; 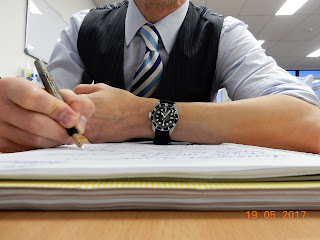 I was extremely disheartened to hear of the death of singer/songwriter Chris Cornell yesterday, and it was heartbreaking to learn earlier today that he had taken his own life.
I didn't know much about him beyond his work with Soundgarden and his fantastic title song for Daniel Craig's first Bond film Casino Royale in 2006. It wasn't long after that that I got hold of his album Carry On and developed an appreciation for his razor-sharp voice.
I thought 2016 had been a bastard-coated bastard with bastard creme filling* and I'd hate to think that this year will bring us more misery as the Grim Reaper takes away more talent.

Cornell was only 52 and tributes have flooded the news and social media in the past day or so and, aside from a prolific body of work and a respected place in rock history, he leaves behind a wife and three children.

I'll leave you all with this clip off YouTube, of his acoustic rendition of Prince's song Nothing Compares 2 U.
It showcases his wonderful voice and further demonstrates just what the world of music has lost this week.

* that term came from a fellow member on a wristwatch forum that I frequent. Funny, funny line.