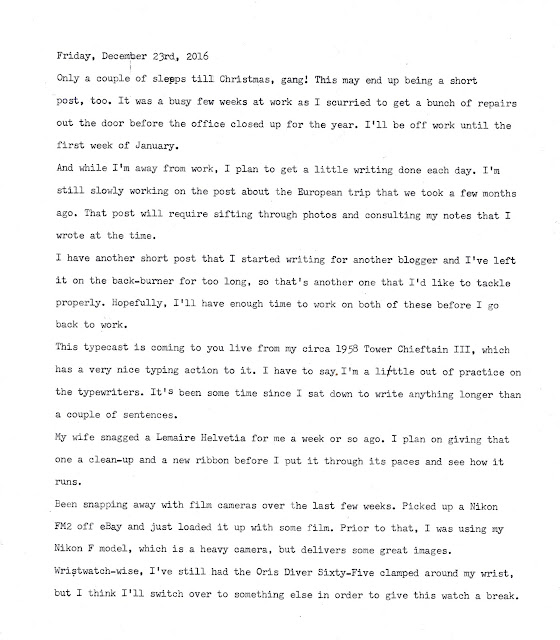 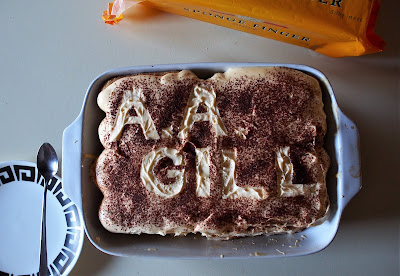 And here's the tiramisu dessert that I made last weekend, in honor of the recently departed A.A Gill.
I cut out some card-stock to make the lettering.  Then I laid it on top of the dessert and gave it all a liberal sprinkling of cocoa powder before putting it in the fridge for a few hours.
Later, I used tweezers to carefully peel off the letters. It almost worked out perfectly.
Yes, I have too much time on my hands.
I'm currently reading his memoir, Pour Me: A Life, and enjoying it. It is in this book that he writes about his missing brother, as mentioned in my post last week. 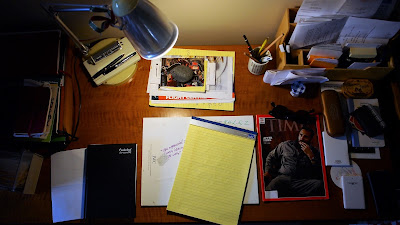 Once again, my desk was in need of a Spring clean. Took me less time than I thought it would. Still too much crap here and there, but it's a lot better than it was.
Now, let's see if I can keep it that way. I want to get some writing done while I have some time off from work. 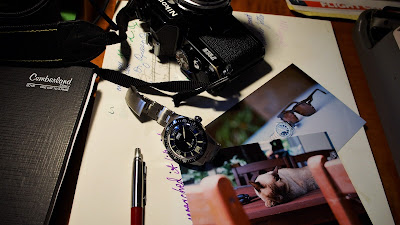 The circa 1967/68 Nikon F Fotomic SLR that I've been using has produced some nice photos, but really, how many photos can I have of a sleeping cat?
I've loaded up the recently acquired FM2 with some film. I'll put this camera through its paces and see what kind of results it yields.
Then, I'll go through some of my other cameras and see if there are any that I can move along. I have three Olympus Trip 35 rangefinders, for example. I'm sure I can sell one of them without missing it.
I've now been wearing the Oris Diver Sixty-Five almost exclusively since I got it. Might be time to give some other watch a bit of a run. Not sure which, though.

Here's the Tower Chieftain III. Works like a charm. I'm a little tempted to maybe give it a paint-job, but I'm not sure. Probably best if I just leave it as is.

Well, that's another week down. The sun is out and it's a little muggy outside. Think I'll stay indoors and just chill.

I hope you all have a pleasant and very Merry Festive Season, dear readers, no matter what you celebrate at this time of year.
Stay safe and thanks for reading!
Posted by teeritz at 18:15