"At this stage it is in our interests that he surprises us. It is in everybody's interests to hope that he will be a better president than he was a candidate,"
-- Arianna Huffington
And that's all I'll say about it, because I don't do politics.

Not much to report, gang. Work has been busy as I finally caught up on the work that had piled up while I was on leave. It only took me five weeks! 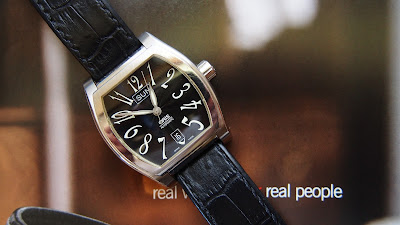 Wristwatch-wise, I got rid of my Oris Miles Tonneau, since I've found that it has barely been worn in all the years that I've had it. It was a large watch on my wrist. If it were just three or four millimetres smaller, I would have kept it. It's just that, at 38.3 mm across, and 49mm long, it looked like I had a box of matches across my 6.5 inch wrist.
Besides, in the interests of keeping my collection at the same level, I figured one watch should go since the new Diver Sixty-Five arrived. And this is the watch that I have worn all week. 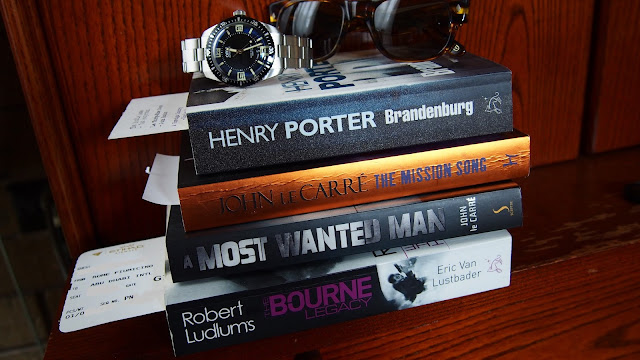 Since watching the mini-series of The Night Manager a few weeks ago, I've been passively searching for John Le Carre's book on which it was based. Looking at my bookshelf, I noticed that I have nine of his books. Although I do have his classic Tinker, Tailor, Soldier, Spy, I have yet to get copies of the other two tales which form the 'Karla Trilogy', those books being The Honourable Schoolboy and Smiley's People.
A few months ago, I snagged a copy of his first George Smiley novel, A Murder of Quality, and I do love the way Le Carre writes, even though a watch forum friend of mine stated that this is Le Carre's least spy-like novel.
Anyway, I began reading Brandenburg, a Cold War espionage story set in 1989, quite some time ago and then stopped for some reason. For some other reason, I then started reading The Bourne Legacy, a continuation novel about Robert Ludlum's most famous character. This book was written by Eric Van Lustbader, who has managed to churn out another ten Bourne books on top of this one. I have to say that I got about 68 pages into it and thought; That's it! Too much cliched and over-wrought dialogue."
I couldn't take any more and I thought that, if I kept reading this book, it would ruin the memory of Ludlum's books for me.
My wife will never read Harper Lee's sequel to To Kill A Mockingbird, the posthumously-published Go Set A Watchman. She said that she fears it might tarnish her opinion of Mockingbird, a book that she loves and has read countless times.
Now, Ludlum was not exactly Shakespeare, let me say that right from the get-go. However, what he did, he did quite well, and I would hate to read of the further exploits of Jason Bourne, since I always got the impression that, by the time of Ludlum's third and final book in the series, The Bourne Ultimatum, Jason Bourne had finally come to terms with his past and was beginning to remember more tidbits of his real identity as David Webb.
And so, I figured that I was not going to continue with Van Lustbader's Bourne book.
Besides, life is too short to read bad fiction. I may take another crack at this book later on, but right now, I am enjoying Henry Porter's Brandenburg. This book is a slow burn, but it's considerably better written.
In my hunt to find the elusive Le Carre book, I managed to find a couple of his other titles that sounded interesting.
The hunt for The Night Manager continues... 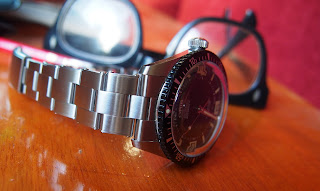 I still had the Oris Diver Sixty-Five on my wrist as the week began. I do like the bracelet design, since it harks back to the rivetted Rolex Oyster bracelets of the '50s and '60s.
The watch has felt a fraction snug on my wrist this week, so I think some minor adjustment to the clasp may be in order. All I need is a safety pin and 35 seconds.

Thursday rolled around and, as I was buttoning up my last clean shirt, I decided that I would throw on a tie as well. My wife picked up a couple of cheap polyester knitted ties for me while we were in Italy a couple of months ago. She wasn't being cheap. It's just that I happened to like the designs of the two ties that I chose. They cost a whopping fifteen Euros each.
Anyway, the large collars of my shirt probably (actually, definitely) aren't correct for the width of this tie, but I didn't care. It has been ages since I last wore some neck-wear. I have about thirty ties, left-over from my days of wearing a suit while selling wristwatches, and I hate to see them just sitting in their box. All rolled up with nowhere to go. So, I threw one on. Still had the Oris on my wrist; 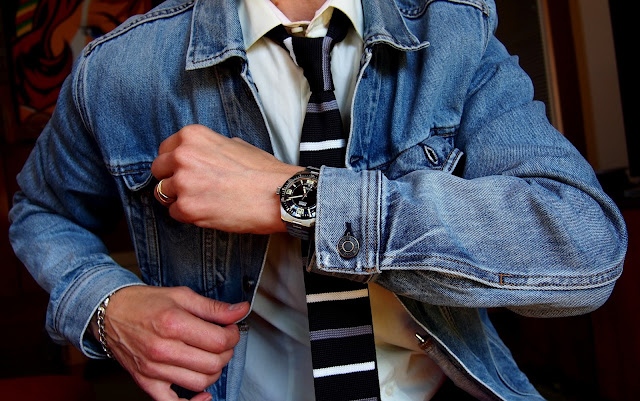 My wife and I decided last weekend that we were sick of the iron that we had in the house. Same with the toaster. Both of these appliances had gotten long in the tooth and they weren't working the way they used to. It was time to replace them. Always bugs me how household appliances all decide to pack it in around the same time.
However, we went to a nearby clearance centre and picked up a new toaster, iron and sandwich press for about $160 bucks.
Where was I going with that? Oh yeah, last clean shirt. I got home from work Thursday, wearing my last clean shirt, and had a drink. At first, I felt like coffee, then I thought a Gin & Tonic might do the trick. In the end, though, I grabbed a small bottle of aranciata rossa out of the fridge. It's a soft drink. Kind'a like Fanta, except made with blood oranges. And probably a kilo less sugar.
That did the trick.

And that's it for another week, gang. I got a few more busy weeks leading up to Christmas, as everybody decides that they want their wristwatches repaired before the festive season (ain't gonna happen for everybody). Still, better to be busy than not.

Thanks for reading, and have a nice weekend, all!