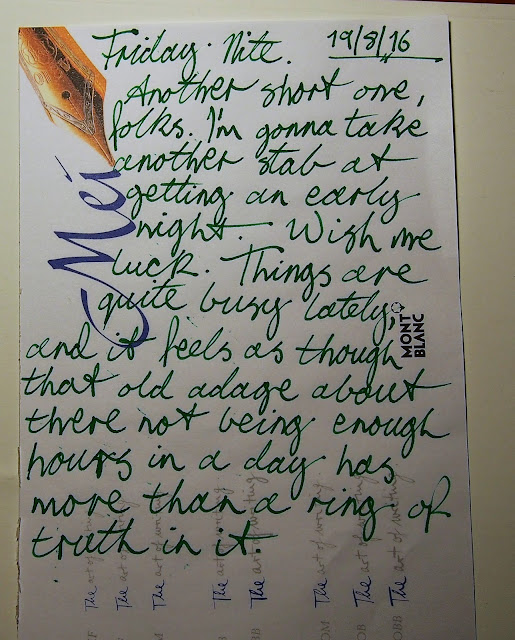 Started the week wearing the Seamaster 300 on bracelet; 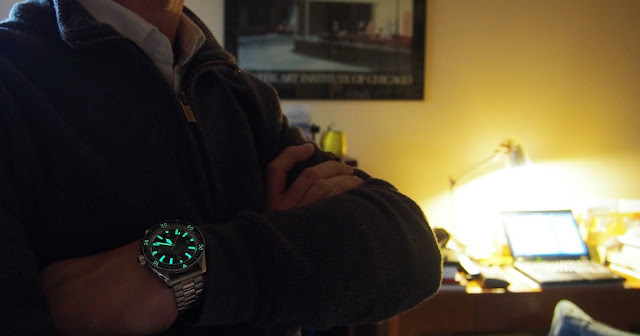 This generic straight-edged end-link bracelet is quite rattly and it feels cheap. Which makes it absolutely perfect for this watch, giving it an even greater vintage vibe than it already had. And that's saying something. 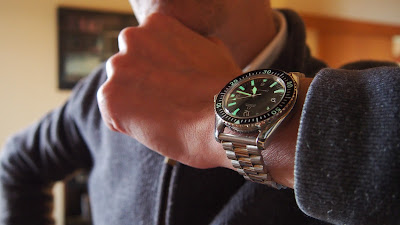 As I said a couple of weeks ago, I was this style of bracelet and this one came along, courtesy of eBay, so that I could try this watch on steel to see if I liked the look and feel of it.
So far, I'm pretty happy with it. Yes, it does have the build quality and feel of a 1980s Seiko bracelet, but I have never seen one of those fall apart on somebody's wrist. And this was the argument that somebody presented me once when I stated that the Rolex Oyster bracelets of the early 1990s felt cheap to me, considering the brand;

Me: "I dunno, the bracelets are still being made with folded end-links, which can't be as sturdy as solid ends."
Customer: "When have you ever seen a Rolex bracelet come apart?"

He was right, of course. 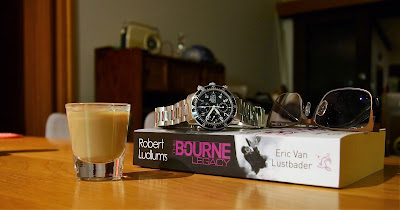 Wednesday, it was time to switch to something different while I finished off the last of the Bailey's Irish Cream. Man, if this is what Ireland uses as cream, then that would explain a lot!
I'm going to get around to reading this Van Lustbader book soon. Although I'm a fan of Ludlum's Bourne series, I'm curious to see what possible direction they could take Jason Bourne. I once tried reading Van Lustbader's book, The Ninja, but I found one of the love scenes in the book absolutely hilarious. That was not his intention, I'm sure. Maybe I'll see if I can find another copy in a thrift store one day and have another crack at reading it. 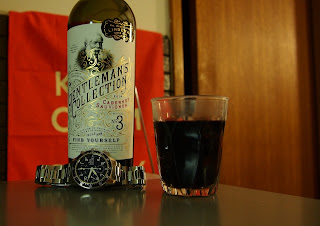 Got home from work and had a cup of coffee. Made myself a pizza for dinner a couple of hours later and poured myself a glass of cab sav.
To be honest, I bought it more for the label rather than knowing whether or not the wine would be any good. I'm no connoisseur, I will freely admit, but I just find that a half-decent Cabernet Sauvignon tastes to me the way a red wine should.
But what do I know? Went down smoothly enough, though.

Hope I can soak the label off this bottle when I'm done. Might make a nice bookmark. And I love the whole Steampunky/Snake-oil/Dr Emerson's  Magick Rejuvenatory Elixir medicine bottle vibe of it.

After dinner, I thought I'd switch watches. Time to bust out the Big Kahuna, the Rolex Submariner 5513; 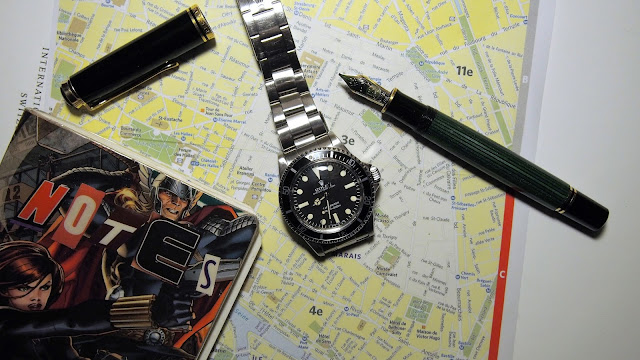 I wear this one sparingly because it's in dire need of servicing. I'll get around to this sometime later this year. I hope.
And that's another week done and dusted. Still busy at work, still a few curve-balls. Still, nothing I can't tackle. It's all good.

Oh, wow, without realising it, I've managed to wear my three Grail watches this week.

These three watches were the ones that I spent the longest time coveting. Both the Sinn 103 and the Omega Seamaster 300 were on my hit-list for over five years before I got them. And, as you may recall from previous posts, the Submariner was the watch that I had wanted ever since I was a kid in the mid 1970s.
Ahh, if only I had saved my money when I first started working and bought one back in the late 1980s. I'd be a vastly different animal where wristwatches are concerned, I'm sure.

Oh well...thanks for reading and have a great weekend, all!