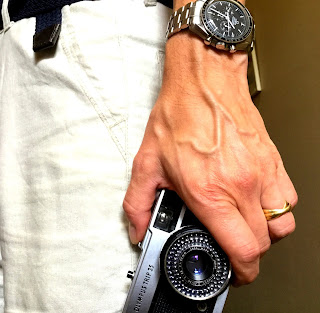 I wore the Omega Speedmaster earlier in the week. I haven't worn this watch much so far this year, but whenever I put it on, it feels like I'm wearing it for the first time.

Here we are, halfway through March and it's time for the annual BaselWorld Watch Fair which takes place in Switzerland. I'll be interested to see what some of my favourite brands unveil this year. Not that I'm in the market for anything. I'm just curious to see if A) there will the a noticeable shift towards smaller-sized watches, and B) if we'll see a few more watches based on designs from brand archives.
Watch sizes started getting larger back around 2003 and I thought it was just a passing fad. I was wrong. It stuck around, and is still evident today when I see certain types of watches in a 43mm diameter that would have been a 38mm watch ten years ago. There has been a slight shift back down towards smaller sizing in recent years, but many brands still have dress watches tipping past the classic 40mm size. We'll see what this year's watch fair brings.
As for re-editions of past models, quite a few brands got onto this bandwagon a few years ago. Tissot released the wonderful Visodate model five years ago and it retailed for $750 AUD. Meanwhile, Omega brought out the $7,595.oo AUD Seamaster 300 Co-Axial a couple of years ago. Both watches have been hugely successful for their respective brands. So, it would appear that these heritage models do indeed have something for everyone.
Again, I'll be interested to see what this year holds.

I switched over to the Sinn 103 St Sa chronograph. Monday was Labour Day here in Victoria and I knew that the next day was going to still feel like a Monday to me. Happens to me every time we get a long weekend. So, I wanted a watch that had both day and date on it;

It's been Autumn here since March 1st, but you could be forgiven for thinking that it was still Summer. We've had some very hot days here. Today's temperature got to 32 degrees C (around 90 deg F) and, by the time I got home from my twenty minute drive from the train station in my non air-conditioned car, I had to peel my shirt off before throwing it into the laundry basket.
And people say global warming doesn't exist. That's not me getting political, mind you. That's me just feeling the heat. As I've said here before, I don't recall these types of seasons back in the '70s when I was a kid.

I took a few snaps of the bookshelves because I made a few slight decorative additions. Here's part of the hard-boiled crime shelf; 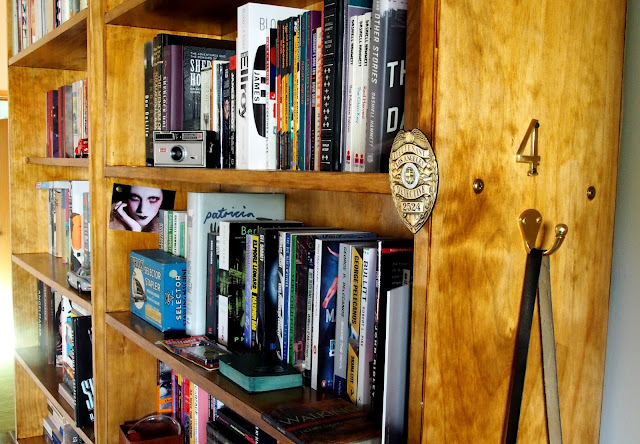 General and classic fiction has a couple of classic cars; 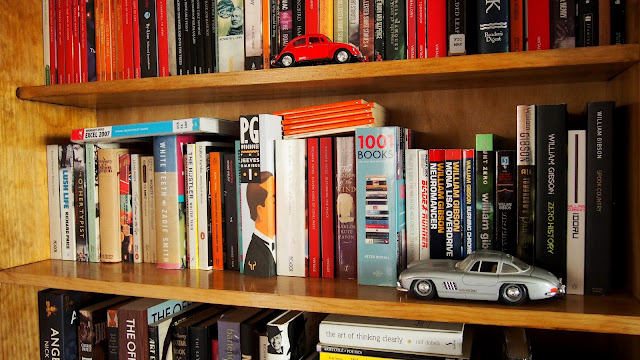 And the Bond shelf needed one more tweak. When I visited the gun range in Thailand a couple of years ago, I picked up a few spent shells, thinking that I wanted some little keepsake from the experience. A 9mm slug from the Glock 17 would do nicely; 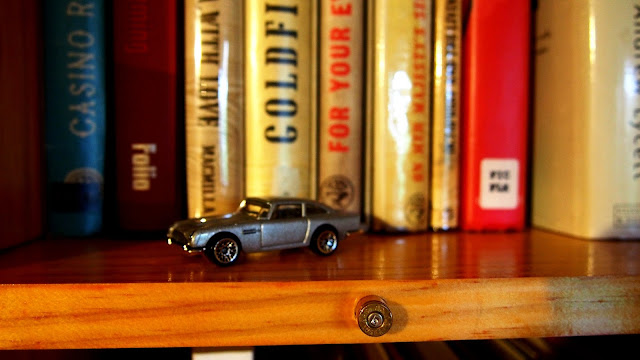 A few light taps with a hammer were required, but it got in there in the end. That ain't coming out without pliers. 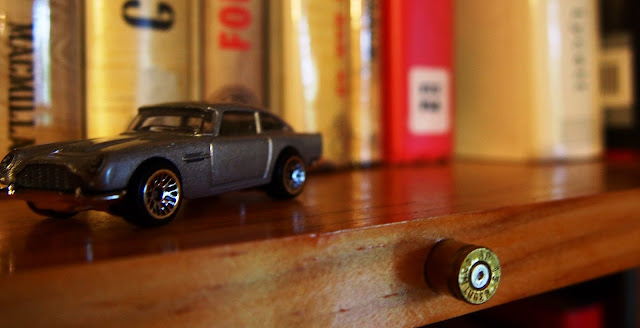 I'm inclined to perhaps drill a little deeper so that the shell sits in a little further, but maybe I'll just leave it be.

I switched over to the Longines Expeditions Polaires (that's the short name for it) on Thursday night when I began the typecast up top; 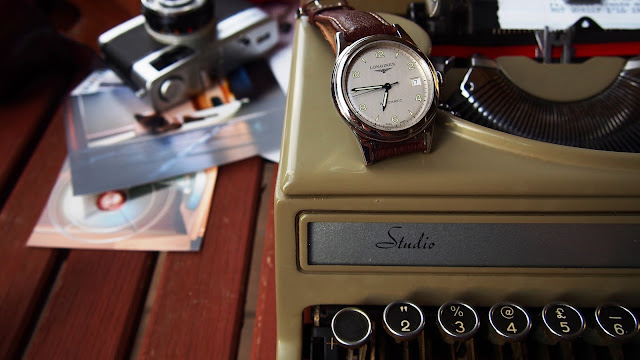 And here's how a couple of the photos taken with the Trip 35 turned out; 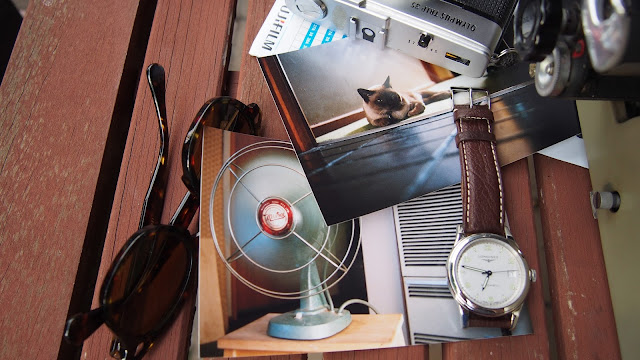 Notice the photo of Madame Wispola Dusenberg doing what she does best. Which is sweet F.A.
We had three mid-Century vintage fans in the house. We use the best one. It's a classic Mistral with a slight hammertone finish.
The other two fans had cords that had melted slightly. The motors in these things can get pretty hot and I think these fans are now an electrical hazard. I had contemplated getting them re-wired, but to be honest, I couldn't be bothered. One of them was the Elcon fan that belonged to my family. This one also had a broken blade fixture which would require some real MacGyvering. I thought about keeping it ('cos I'd figured out a MacGyver-style repair for it), but decided that we couldn't store it anywhere, so my wife took it to a local thrift store. She explained what was wrong with it and they told her they wouldn't even try to fix and sell it, but rather, they were going to put it on display near the clothing racks. Because, you know, hipsters love that sort of thing. They think it's totes amazeballs.
I visit this thrift store from time to time and it'll be a kick to see this fan on display in there. I may even burst into tears when I see it. Either way, I took a picture of it a year or so ago in the interests of posterity and archival purposes; 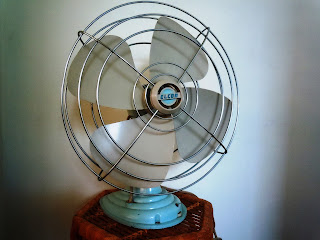 Funny. I look at this picture and it conjures up memories of me sitting in the lounge room, drinking 7-X lemonade through a soggy paper straw and watching Get Smart repeats on Channel 7 at 5:30 on a hot Summer afternoon, the whirring hum of the plastic blades, with their rhythmic sweep across the room.
Now those were simpler times.

Thanks for reading and have a great weekend, all!
Posted by teeritz at 03:41