This one will be brief, gang. But it has a few nice pics!

I got a headache this afternoon and it just refuses to go away. However, since I was taking pictures of my watches this week, I figure I shouldn't let a measly headache stop me from posting. Although, I can't say I feel too inspired to write anything too long. So, this week's post will mainly be photos of the watches that I've worn this week. 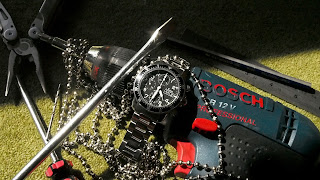 Mon, Tue, Wed
I wore the Sinn 103 St Sa chronograph.I had to replace the chain on the blind in the bedroom. Cheap crap. Let's hope this chain lasts longer than six weeks. I actually went out and bought a whole new bracket for this blind. When I got it home, I realised that it didn't fit the tube which holds the blind.
'Yeah, that's the only size they send us', said the lady at the store. 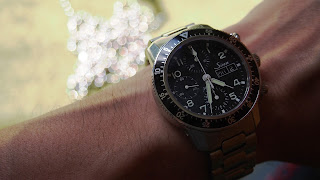 Anyway, once I figured out that the bracket wasn't going to fit, I took it apart and salvaged the chain. And, as an added measure, I removed the brackets from the wall and shifted them slightly. The whole apparatus now slides up and down considerably smoother than it did. Hopefully, that's done the trick.

Earlier on Wednesday, I had a tonne of household admin-related tasks to do, so I switched over to the Omega Seamaster AquaTerra in an effort to get into a more business-like mood;

Spent a couple of hours running around paying bills like a mad dog, but it was a good feeling as I crossed each task off the list.
Left the AquaTerra on my wrist through Thursday and still had it on today when I stepped out late in the afternoon.
That's when the headache kicked in; 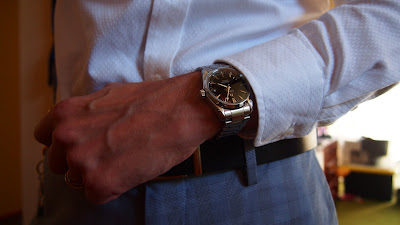 Got home, had some dinner, then switched over to the Omega Seamaster 300, but I took it off the NATO strap (old picture); 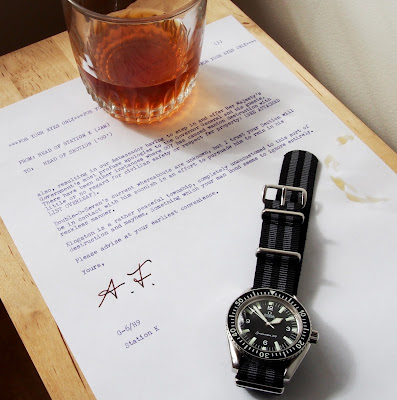 And put it on a tropic rubber strap, in an effort to de-SPECTRE it a little; 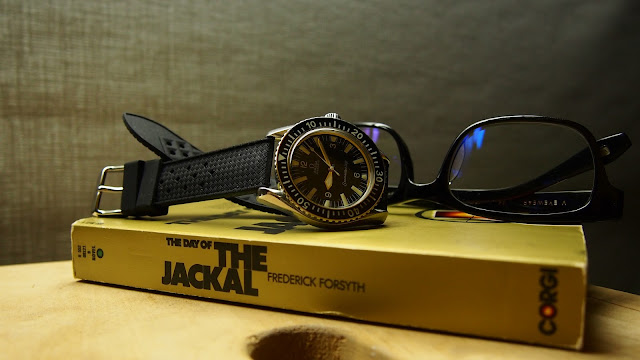 If you're into airport thrillers and have never read Frederick Forsyth's book, The Day of The Jackal, then you're missing out. Forsyth was a journalist back in the 1960s before he turned to writing fiction and this classic book of his is written in a police procedural journalistic style. Before computers came along and the world went Digital, you could use the method Forsyth describes in this book to create a new identity for yourself.
The Digital Age really took the fun out of some things.

And that's this week done. Okay, I think I'd better pop a headache tablet. Damn, I was doing so well.

Thanks for reading and have a great weekend!
Posted by teeritz at 02:37