Plenty to be done around here. There are fewer boxes scattered around the house this week as we continue to sort through them. I can see that I'll be writing quite a few eBay listings soon.

When we moved into this house three weeks ago, there was a bare tree in the side yard that I had decided would have to go. It looked barren and creepy. My wife told me to leave it be. It's a cherry blossom tree, she said. Well, it started to blossom about a  week ago. I was wearing the Omega Speedmaster. And the blossoms are a wonderful shade of pink.

Anyway, I had a shelf to build. Our en-suite needed some storage space. I grabbed the timber and a bunch of tools and got to work. It took me a few hours, I had to re-cut a few pieces of wood, but I got there in the end. Barely.
Actually, I shouldn't call it 'wood'. A builder once told me; "Wood is what you burn. Timber is what you build with." 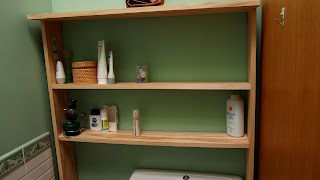 I positioned the shelf against the wall in the en- suite to find that both ends of it didn't sit flush, dammit. This was solved when I cut a piece of aluminium and fashioned it into a bracket which I fastened to the wall and the top of the shelf. A couple of strips of rubber tucked in behind the shelf and it was now sitting flush against the wall.
I realised later that the blade on the jigsaw that I used had a slight bow in it. This caused a slight unevenness in every cut.  I'll have to buy a new blade.
Okay, that's one done. The shelves are narrow enough to hold the various bathroom products and the top shelf is wide enough to hold two folded towels. This shelf will have to come out one more time so that I can give it a couple of coats of paint. I'm thinking a gloss white, to contrast against the green wall. A glossy paint should react better against steam too, I'm thinking. This was the easy one. As I continue to unpack boxes, I'm unearthing our books, which will need to end up on shelves. That we don't have. Yet.

Tuesday
However, I couldn't worry about bookshelves. Not today. Today was our nineteenth Wedding Anniversary. My wife had told me not to get her anything. "You bought me a house", she added.
"That was last month", I replied.
"You built me a shelf."
"I built us a shelf."
Anyway, she went off to work and I headed out to the nearby shopping centre and bought her a few exotic soaps. I wore the Hamilton Khaki Mechanical. All 44mm of it. 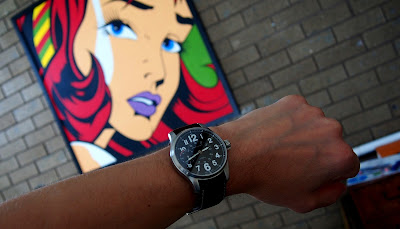 Later, I had to go hand in the keys to our old house. That chapter of our lives is over. I switched back to the Speedmaster. The Rentals Agent at the real estate office asked me if I'd gotten the carpets steam cleaned. Nope. I had not. The carpets were laid about two years ago and we have kept them spotless ever since. 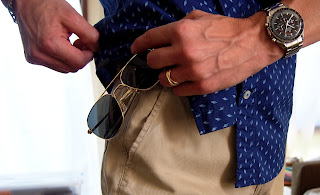 I began to get the feeling that this could get slightly ugly. She told me that she would make a final inspection of the property the next day. If that was satisfactory, we could then fill in the paperwork to get our Bond deposit back. My wife and I are really hoping that we don't get a call saying that we have to pay for the carpets to get cleaned. That will really tick me off, and I will be forced to hand the agent the receipt for the oven element that I paid for three days after we became tenants of the property. So, if she wants to charge me a hundred bucks for carpet cleaning, I will ask her for $250 for the oven repair. Considering just how much this real estate agency has screwed out of us already, I aim to get back every dollar that's owing to me.
Yessiree, tings could get ugly indeed, ahh yeah. 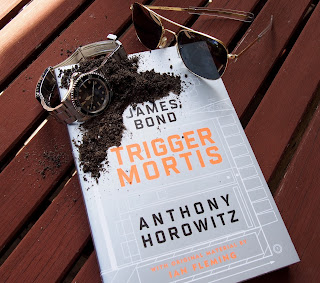 I was wearing the Rolex Submariner as I finished the new Bond novel Trigger Mortis. Anthony Horowitz has written an outstanding OO7 book. One that shows a reverence and understanding of Bond and his world. This is what happens when you get an author who knows how to write AND who gets what Bond is all about. Nothing against Sebastian Faulks, Jeffrey Deaver and William Boyd. These three authors were responsible for the last three Bond continuation books and they are acclaimed and well-respected writers in the genres they normally write in.
However, I can't help but think that they thought writing a Bond book would be a walk in the park. It's not. It's often all too easy to fall into pastiche and produce something whereby you have a villain with some weird physical deformity and an improbably named Bond girl. Granted, Horowitz gives Bond a love interest named Jepoardy Lane, but he has fashioned a story which is solid and puts Bond through the ringer whilst presenting it with the air of a Fleming book. That is the hardest part. Given that James Bond has existed in popular culture now since 1953, and that the films have been around for over fifty years, it can be all too easy to write a Bond book that reads like the script to a Roger Moore or Pierce Brosnan Bond film, filled with improbable stunts, over-the-top villains and sleazy double entendres.
Anthony Horowitz managed to do something quite difficult with his book. Thank God. Bit of luck, Ian Fleming Publications will ask him to write another one in a couple of years. 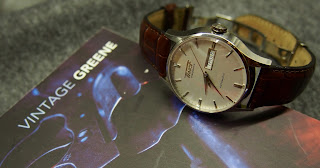 Thursday
Switched over to the Tissot Visodate briefly. Haven't worn this watch much in the last couple of years. Lately, I've been thinking that it's a tad too large, but this opinion faded once I put the watch on my wrist. Tissot batted one out of the park when they made this watch. The review that I wrote on this watch back on October 10th, 2010 has garnered almost 440,000 pageviews. If I only had a dollar for every time somebody...

Later that morning, I put on the modded the Seiko 7002 before heading to the gym for a quick workout. This watch has gotten a lot of wear in recent weeks, since it's my go-to watch for handyman duties around the house. Performs like a trouper. 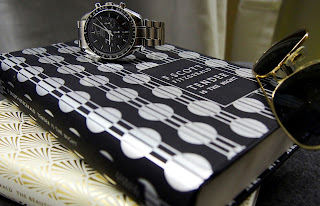 And later that night, I decided to grab the Omega Speedmaster. As we head towards the warmer months, I can see myself wearing this watch less and less. It has a water-resistance rating of 50 metres. Some diehards will swear that this is good enough for swimming with, but I have seen too many 50m w/r watches experience water-entry issues, so I'll always play it a little safe where this particular watch is concerned.

It's now Friday afternoon. I'm still wearing the Speedmaster, but I think I'll be putting on the Seiko soon. I've just had lunch (a peanut butter sandwich, if you must know) and I think I'll make my wife and I a quick coffee before getting stuck into some more repair work around here. There's a small 1960s coffee table that needs some sanding. My wife has a much-deserved four days off work and I keep telling her to take things easy, but her work ethic has other ideas.

Thanks for reading, all, and have a great weekend!
Posted by teeritz at 20:18