EveryDay Carry, Part 1: My Search for the Ultimate Keyring Set-Up.

This should be easy.
Or so I thought. I have two car-keys, two small keys for various padlocks, another small key for the garage, and one key for the front door. I decided to get myself some kind of key-fob in leather. It was time to get a little more mature with my keys.
First off, I wanted something that gave me the option of attaching to a belt loop or just putting in my pocket.
I should mention that this latest quest was somewhat due to my spending a bit of time looking at a website called everyday-carry.com.
It was there that I saw just how varied people are with what they lug around on a daily basis. Some of them were very minimalist, carrying just their keys, phone and wallet, while others carried a myriad assortment of things ranging from paracord bracelets (I never knew that 30 metres of nylon cord would come in handy) to two or three different folding knives.
I was a little dismayed at how few of the guys (it's mainly men who visit this site, although I've noticed more women on it lately, more power to you, ladies!) wore wristwatches, preferring to rely on their smartphones for the time. But that's just the watch collector in me.
And quite a few of those who posted photos carried pistols. As Bogart said in The Big Sleep (Dir: Howard Hawks, 1945); "So many guns in this town."
I would like to think that they are all law-abiding responsible gun owners with concealed-carry permits.

Anyway, first of all, I needed a keyring. Something practical. With a bit of leather. I stumbled across this type on a site called http://www.apolisglobal.com/ , which sells a range of products. As it turned out, they also sell the Fisher AG-7 Space Pen. I had planned on getting one for the good Samaritan who helped my wife out of her car wreck back in June. The version that Apolis Global sells has a light laser engraving along the barrel which reads- APOLIS: GLOBAL CITIZEN TRANSIT ISSUE: SPACE PEN. Bingo, I'll get two of them; 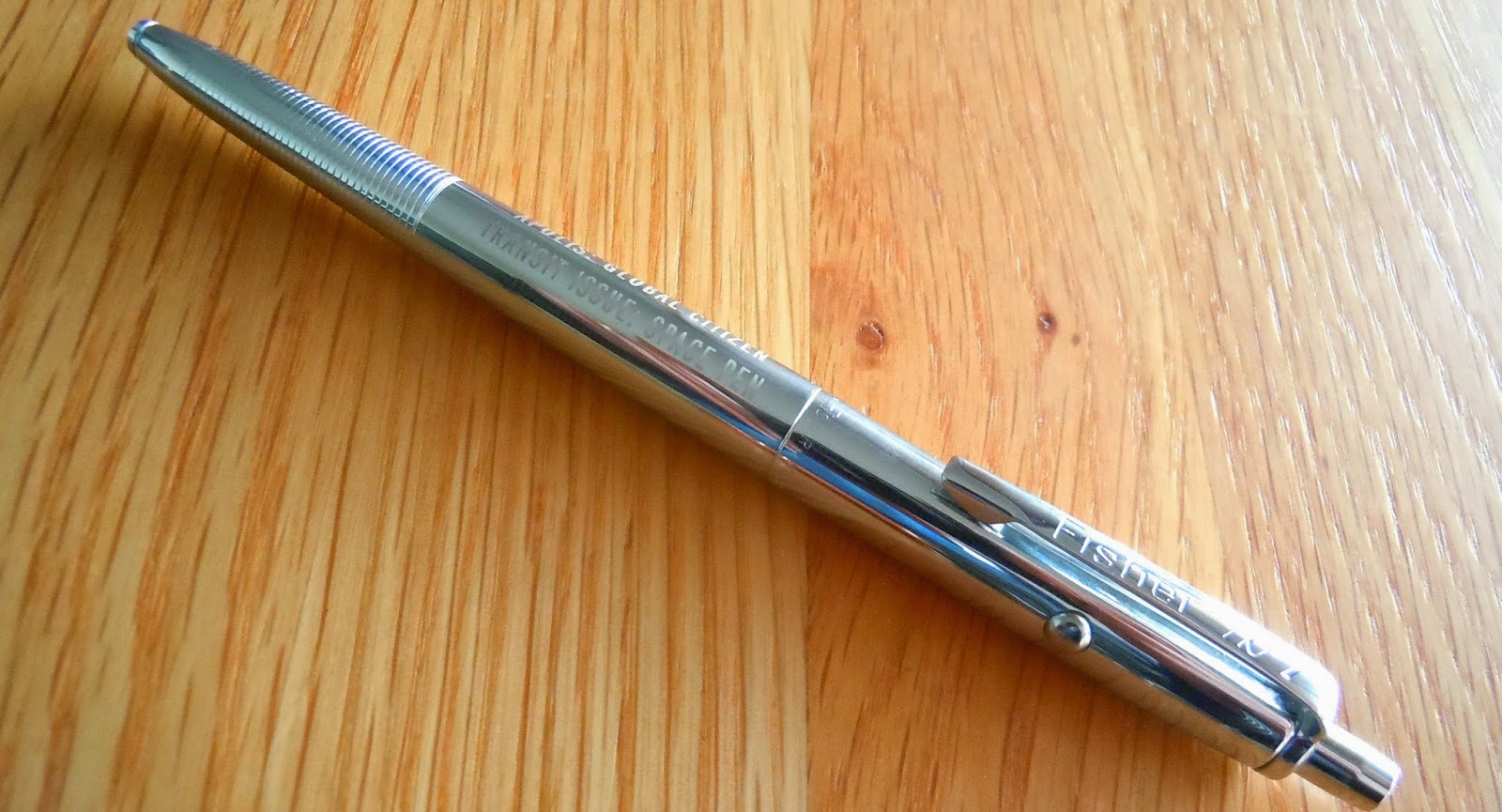 And I ordered one of the keyrings as well; 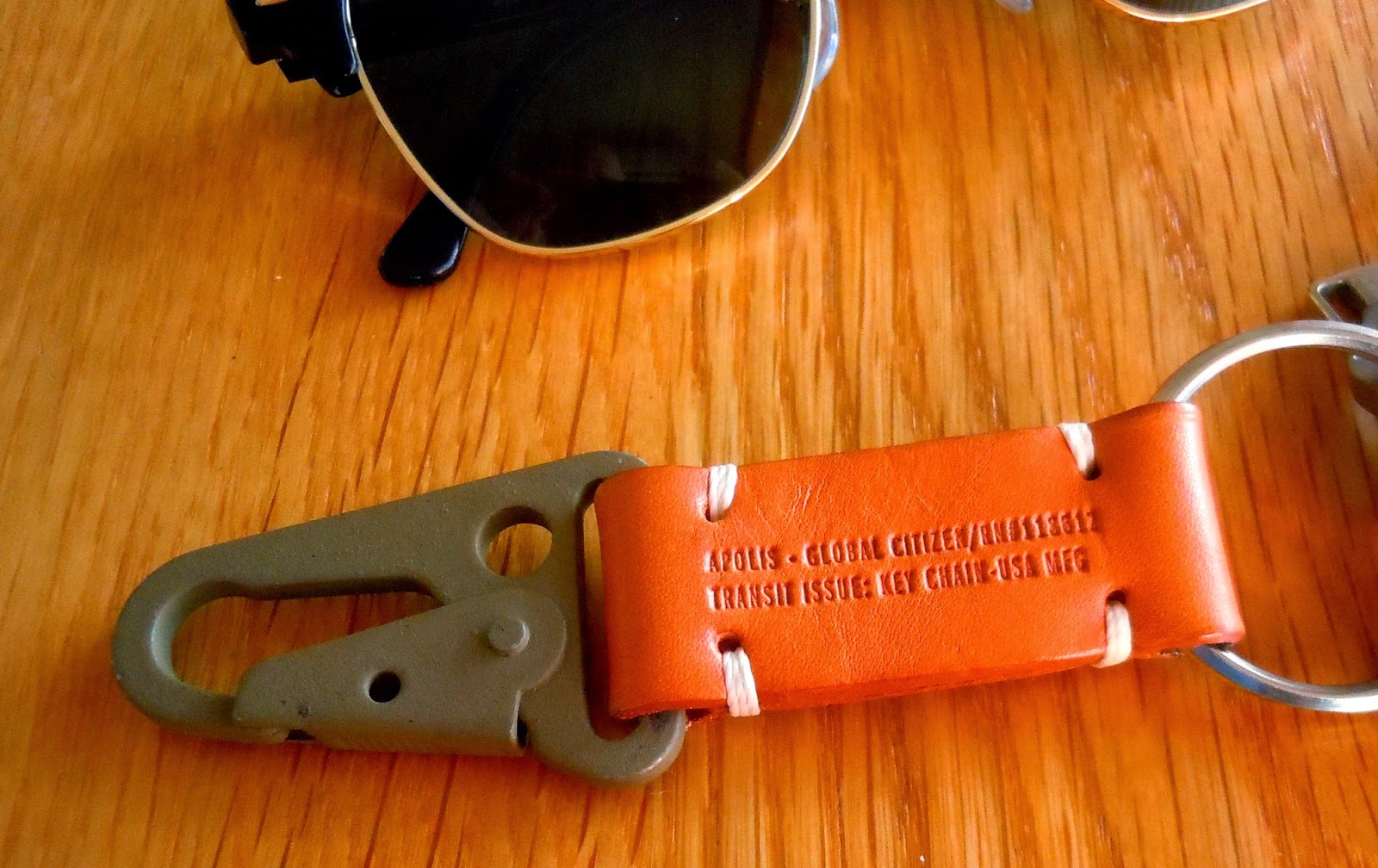 Made from a small strip of folded-over leather which measures about 5.5cm, and held together with waxed canvas stitching. A stainless steel ring on one end and an olive drab painted clip on the other. Hopefully, the leather will darken and age nicely before the stitching wears away. Which, if it does, I'll take it along to a shoe repairer and have them re-stitch it together.
Yes, this might just do nicely.

Now, I needed a tool on this keyring. Knife carrying laws in Victoria are extremely stringent, as I noted in this post;
Friday 30/5/14 - Job Offers, Job Interviews, Happy Birthday Ian Fleming & This Week's Wristwatches


To play it safe, I don't carry my Swiss Army knife on my person. Maybe when I'm an old man, I might. Anyway, I thought I could use some kind of tool that would be handy for cutting open boxes and/or tightening loose screws. So, it was straight to eBay to look for something that I saw on everydaycarry.com. It didn't take long to find the Tiremet Titanium EDC tool; 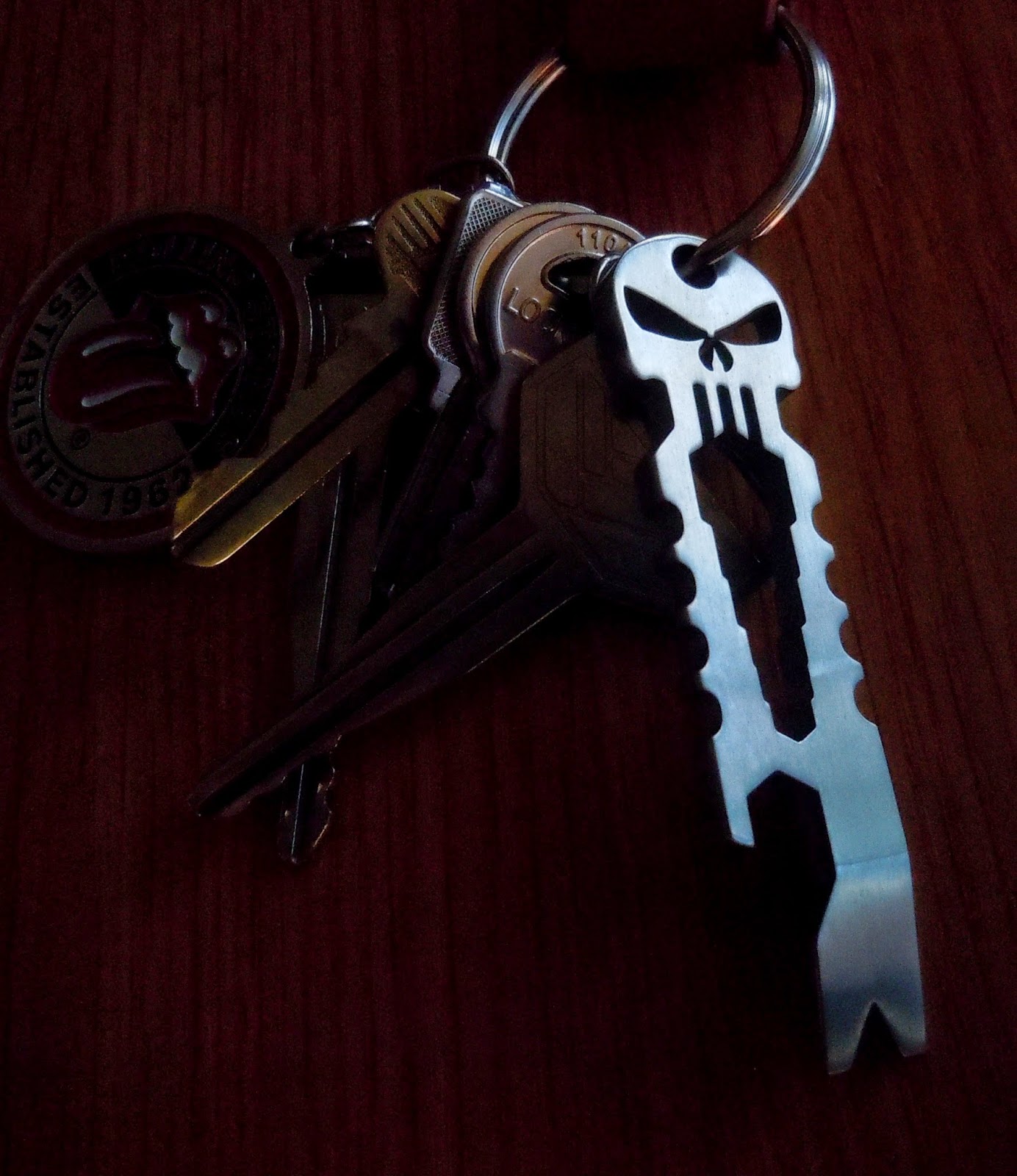 Alright! Just the kind of bottle opener The Punisher would carry. It's a useful little tool. At the business end, you have two different gauged screwdrivers for tiny screws like what you find on spectacle frames and small tech. These drivers are what some folks refer to as 'blade-savers', in that they are also sharp enough for cutting open packages, which will save your pocket knife from having to perform this demeaning chore. A knife collector friend of mine has always said that nothing blunts a knife blade faster than cutting through cardboard.
This end also tapers down so you can use it as a pry bar to lift up stubborn nails and screws. 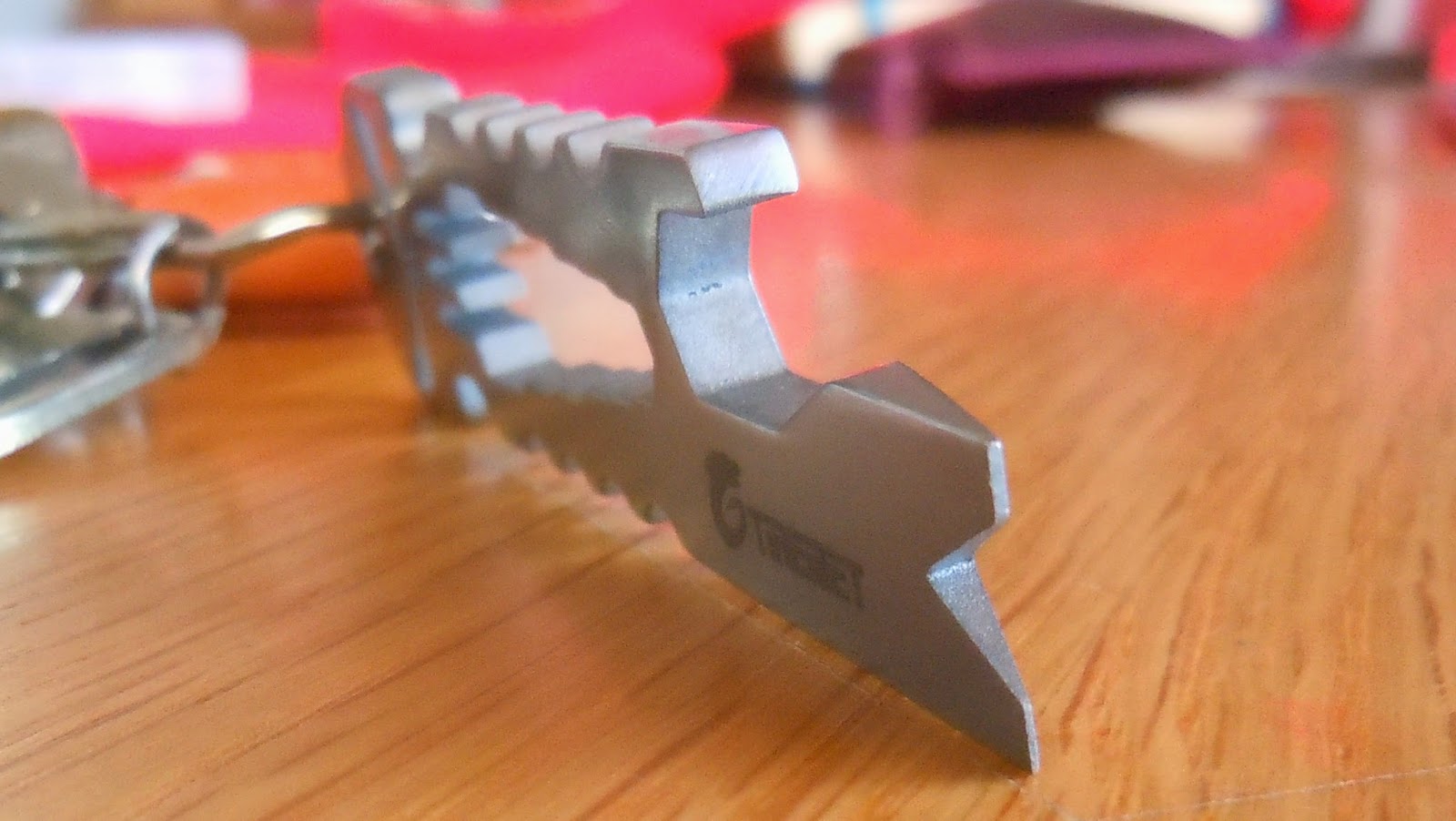 In the middle, you have six different metric sizes for undoing bolts. Notice that the bottle-opener also contains one more wrench size, just in case;

The outer edges are indented. I think this is where you could wrap and tie some paracord around the entire tool. Some folks have suggested that you could fit a few small rubber bands around it too and turn it into a pill holder. Yeah, that might work.

It's not an overly large tool, which is just as well, and, being titanium, it's not heavy at all. 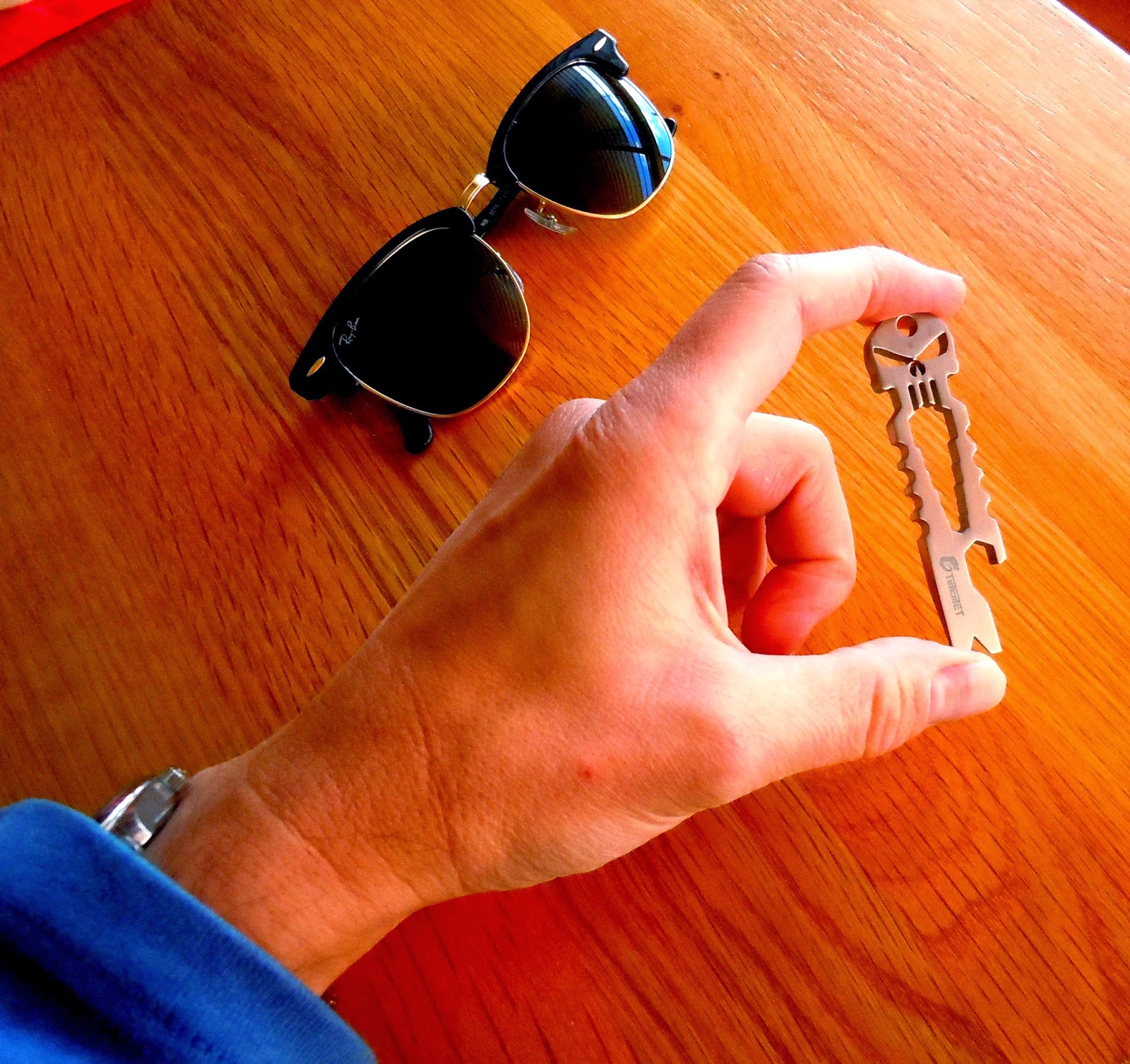 Damn thing is reasonably sharp, though. Might be wise not to reach too quickly into my pocket to fish this thing out. 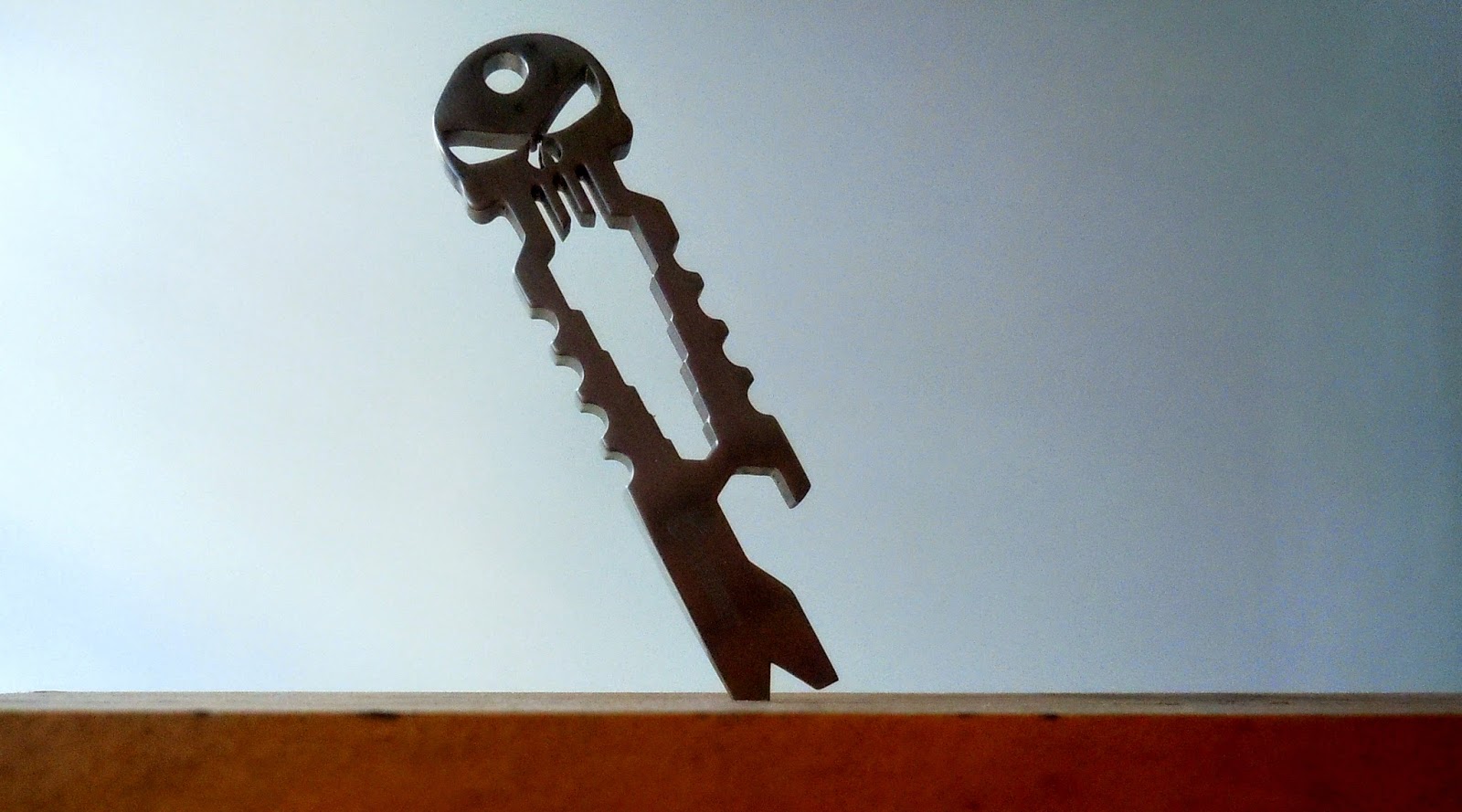 Attached to the keyring, it's long enough to clip to a belt loop...

...and sit in a back pocket without causing any trouble; 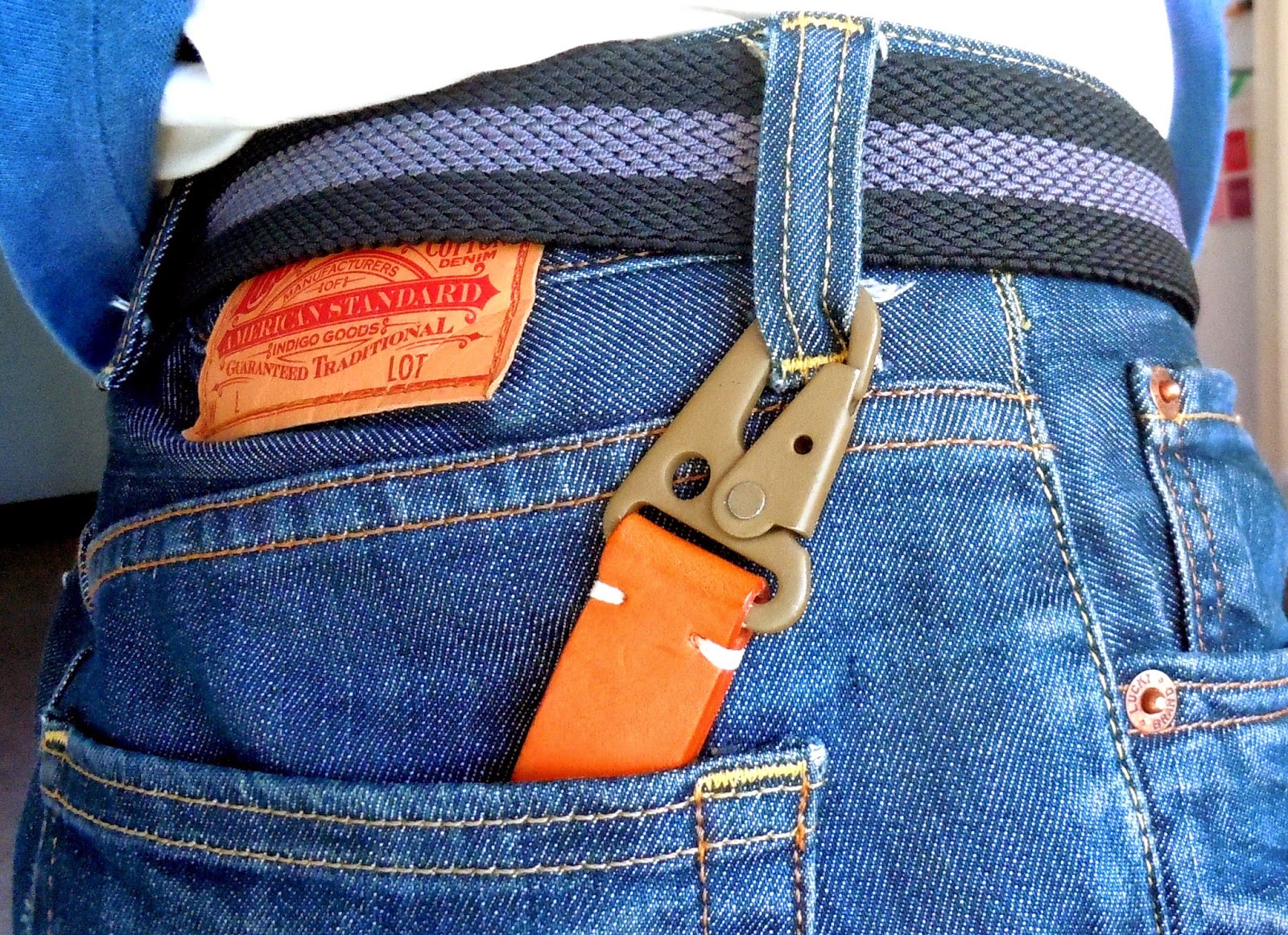 And it's easily able to be folded over and put in a pocket. Should be okay in jeans, but I just have to wonder if it might shred a front trouser pocket. I may find out the hard way one day. Either way, it doesn't take up much space in the pocket.

The real test, of course, will be actual usage on a daily basis. The leather of the keyring is quite soft and I imagine it may soften up even more over time. The spring on the clip is quite stiff, but this is probably a better option as opposed to it being too 'springy'.
I've been trying out other everyday carry alternatives and options, but I think I'll leave those for another post.

Thanks for reading!
Posted by teeritz at 04:22

Email ThisBlogThis!Share to TwitterShare to FacebookShare to Pinterest
Labels: Clothing and Accessories