The Typewriter Collection No. 14 - Olivetti Studio, Circa 1952

I'm not 100% sure, but I think this model dates back to around 1952, based on Ted's Serial Number Database.
When my wife saw this one, she said; "Oh, that looks nice. What is it, Sixties?"
"I think it's early 1950s, but it's a design from the late Thirties", I replied. It certainly does possess design elements from 1930s Remingtons to me. 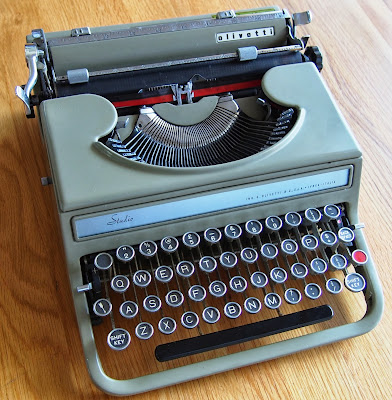 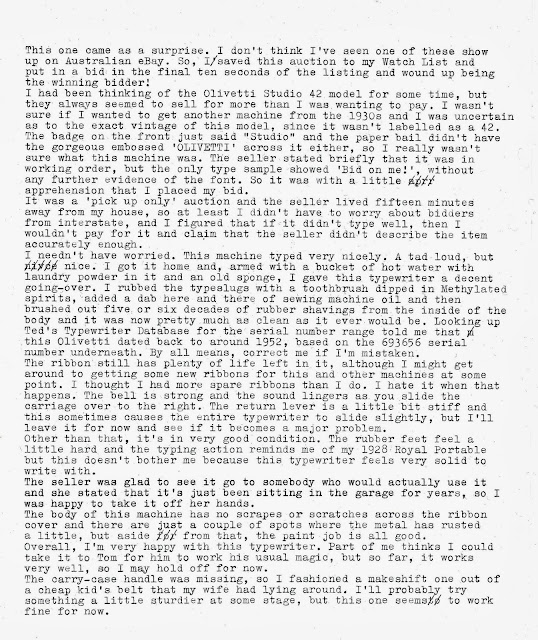 The case was missing its handle, but I soon came up with something makeshift that'll do for the time being; 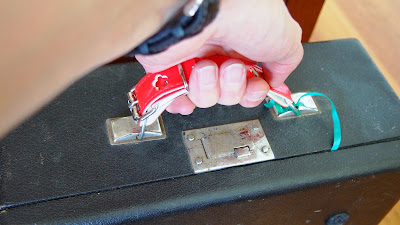 The keytops are in good condition. I took a toothpick and gently scraped around the inner edges of the metal rings to get rid of some built-up crud. 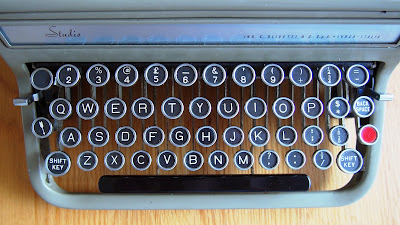 I popped the hood and was happy to find the original metal spools. After my Remette mistake, I've been a little cautious. And I do like how the ribbon cover lifts up like the bonnet of an Italian sports car. I was almost expecting to find a pool of oil underneath this typewriter afterwards. 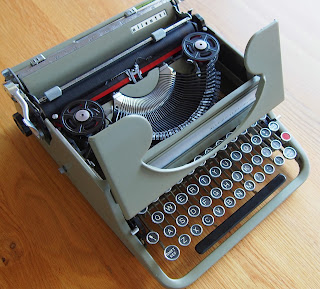 The profile shot. A little bland-looking, but this strikes me as something designed to be a workhorse first, and a show-pony second. And, being a 1930s design, I can only speculate that Italy was doing it tough (again) and perhaps Olivetti was more concerned with solid build quality and no-nonsense aesthetics. Hmm, looks like I left an oily fingerprint on the side there. 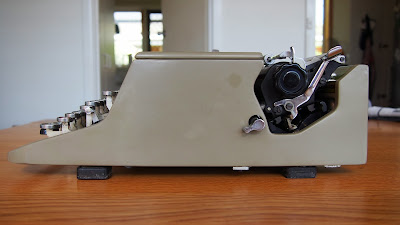 The rear of the machine.

The ribbon colour indicator was filthy. The blue dot was recognisable, but the other two were a dirty grey, filled with dirt. I scraped it out and then painted them in with Liquid Paper. I scraped away the excess with an ice-cream stick and tried using a red fine-point marker. With limited results. I'll have to get hold of a Texta (Magic Marker) and have another shot at it. Unless I can convince my wife to let me use some of her red nail varnish. But the last time I did that, I spilled some on her best pair of stilettos.
Serves me right for wearing them, ha, ha! 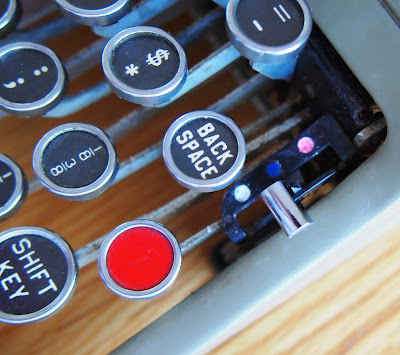 And there you have it. While I was originally looking at Studio 42 models, this one will do just nicely, I think. When I picked it up from the seller and got back to my car, I placed the case in the back-seat and said to my kids; "I think I'm done with buying typewriters. I got enough of them now."

And I can't think of anything else that I really want. Collection's pretty solid and varied. I'm happy with how most of them type and the ones that don't type so flash are beautiful designs and worth keeping for that aspect alone.

My recent Olympia SF escapade showed me that sometimes, even if I want a typewriter for a particular reason, I should perhaps hold off on purchasing it because it may not write in a way or manner that I'd like. I've used enough of them over the past few years to know what I like from a typewriter in terms of feel, key tension, sound and overall design. Part of me still wants something like a Remington Rand KMC standard, but right now, I wouldn't know where to put the thing. And I did recently think about a Dreyfuss-designed Royal Quiet De Luxe from the late 1940s, but, while it may look different to my '47 QDL, it would probably type pretty much the same.

So, I think I'm happy with my Baker's Dozen + One collection at the moment. And I'm thinking that if I decide to go for something else, then I should get rid of something that I have. Fourteen typewriters are (barely) manageable for me and I think I'd like to keep it that way.

The only thing to do next is stock up on ribbons for these babies.
I'm kind'a partial to purple at the moment.


Thanks for reading!
Posted by teeritz at 00:22