December 27th, 2022
Here we are, four days left in the year. This one has had its fair share of ups and downs. I'm currently dealing with a persistent cough that seems to peak overnight, resulting in my having to get up in the wee small hours to give myself an inhalation with-...but I'm jumping ahead a little here. I'll get back to that. 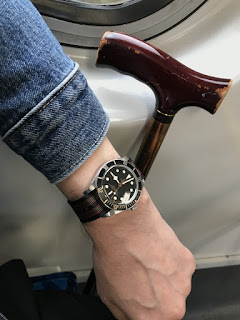 I went back to work on the 14th and, sure enough, there were a few minor headaches to deal with. I have to say, though, that the staff who filled in for me while I was away did a stellar job. I only had to deal with spot-fires rather than major blazes.
One of these blazes was a customer who used his watch incorrectly and managed to 'lock' the crown so that the watch had to be sent off to be re-set. This was a quartz watch that has a bunch of functions to it which are all controlled with the crown. The dial has two hands (hour and minutes) as well as two digital screens which offer other functions such as alarm, stopwatch, count-down timer, etc. Well, the watch had to be sent back to the manufacturer's service centre. When I contacted the customer, I informed him that this repair would take four weeks.
Five days later, he called to enquire as to the state of the repair. We had no new information to give him. The watch was undergoing repair. We don't actually give customers a blow-by-blow update on their repairs. If I tell a customer their repair will take, say, six weeks, there's no point in them calling me a month later to ask how it's going.  It's currently under repair is my standard response.
I've tried to explain this to the store staff who get enquiries from customers regarding their repairs, using the Pasta Analogy;
I'm gonna cook you a bowl of pasta.
The pasta takes twelve minutes to cook in boiling water.
So, don't ask me in five minutes; How's the pasta going? because my reply will be; It's cooking.
Anyway, back to this customer with the locked-up watch. I didn't speak to him when he called on the fifth day. He ended up talking with one of the reception staff. The staff member spent about fifteen minutes on the phone with this customer, who ended up saying that he was going to call the police to tell them that the brand's service centre has stolen his watch.
Yes, that's right. This billion-dollar multi-national Swiss watch brand has stolen your five thousand dollar watch, sir.
I spent the first week back just getting up to speed and taking it a little easier as far as walking around was  concerned. I used the cane that you see in the photo up above and I wore the Tudor Black Bay 58.
A few days later, I visited a nearby jewellery store where I worked very briefly ten years ago. Worst company I ever worked for, but that's another story. This store is a Longines stockist. I've had my eye on a particular watch for most of this year and I thought I'd go try it on, to either get it out of my system, or put a deposit on it.
They had it in stock. I tried it on. The sales gal and I got to talking and she told me that they'd be having their Black Friday sale a week later. She suggested I come back then and place a deposit on it and she'd lock it in at the sale pricing. I had a feeling it would be somewhere between 20 and 26 percent off the retail pricing.
So, I went back the following week and put some money down on it. I'll say more about it in future posts.
A week later, I had an x-ray appointment scheduled. This would be followed by a meeting with the surgeon who performed the operation on my feet back in September. 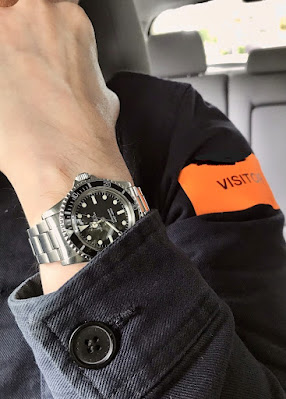 Got the x-rays done and then had the appointment with the surgeon two days later. He had a look at the scars and said they appeared to be healing nicely. He suggested I break up the scar tissue by massaging the area daily. I had a few questions to ask him, mainly regarding long-term recovery and the possibility of further surgery. He allayed my concerns and said that any further surgery looked unlikely.
We talked briefly about orthotic shoes and then he asked me about what I did for a living. I told him I was the Service Manager for a wristwatch retailer and the conversation soon turned to the watch industry and the scarcity of Rolex watches and the prices on the pre-owned market, etc.
We ended up talking more about my job than my feet. I wore the Submariner 5513 for this appointment. And, man, how many of those orange VISITOR stickers have I accumulated over the last few months!? They date-stamp them when you arrive at the hospital's main entrance. Then, they ask you a few Covid-related questions before asking you to remove your mask so that they can give you one of their own tight-fitting, multi-elastic masks.
He seemed happy with the way my feet were healing and told me there would be a follow-up appointment in six months.
Fast Forward...
Happy New Year! I was happy to see the end of 2022. My wife and I have noticed that every seven years or so we tend to have a crappy year, peppered with a few more lows than highs.
Still, we got through the year relatively unscathed.
On Friday December 9th, though, I felt a little raspy in the throat and decided to take a RATS test and, sure enough, it showed positive.
I had Covid-19. Again. I had been careful for months. I wore a mask during my commutes to and from work. I tried to sit away from people who weren't wearing masks whenever possible. No luck. So, I quarantined for the next seven days or so. This bout was rougher than the one I had at the start of 2022. This one came with a very runny nose and a very persistent cough that would flare up in the middle of the night. I slept on the couch for about a week, because I didn't want to keep my wife up. And I also worked from home for the following week. Turned one end of the kitchen/dining table into my workstation.
On Sunday the 18th, I did another RATS test and it showed as Negative. Cool. I could return to work next day, but I'd wear a mask in the office as a precaution, and I'd also keep my distance from a colleague whose immune system is slightly compromised. I wore my Seiko SKX009K. Later that evening (Monday), I had an appointment at a nearby respiratory clinic. A few of these clinics have been established in the last couple of years to take the pressure off hospitals.
I was now Covid-negative, but I was still coughing and going through Kleenex tissues like crazy. The doctor explained that it looked like I now had a secondary infection. He prescribed me a course of antibiotics and sent me on my way.
I still felt crappy over Christmas, but by New Year's Eve, I was back to my old self.
I decided that a doctor's appointment would be a wise idea for sometime in January.
January 14th, 2023
Last year was a very hectic and eventful year;
- Quit the job that I was at for just under six years, on the last day of 2021.
- Started 2022 with a bout of Covid-19.
- Started a new job in late January and stayed there for around six weeks.
- Got a new job in March.
- Had my tooth implants and crowns fitted in April.
- Came down with a flu in mid-June. Had it until the third week of August.
- Got my feet operated on in September.
- Finished the year with another dose of Covid-19.
I have around 30 hours of Annual Leave accrued. That won't get me very far.
As for Personal (Sick)/Carer's Leave, I'm at minus 11.4 hours. Basically, I owe them! So, it's at least six months before I could take a week off. Ahh, well...at least I have my health, so to speak.
Managed to spend about thirty minutes in the sun on Christmas Day and ended up getting sun-burnt. That hasn't happened to me since the Summer of 1990/91.
The feet are still a little fragile. I wake up in the morning and they feel quite tight all along the entire soles. This fades as I begin walking. My left foot hurts at times when I take a step. I've been going to the beach and taking walks along the sand in the early evening, just after dinner and before sunset. I think I need to toughen them up a little.
I've also put on a little bit of a paunch in recent years and I think I may have gained a little more weight around the middle in the last few months.
Gotta do something about that. Exercise won't really do it. It's got more to do with eating a little less. Smaller meals. Portion control, I believe is what the kids are calling it these days.
While I'm at it, since I work on the third floor of an office building, I'm gonna do like Cary Grant used to. I'm going to start taking the stairs a little more. 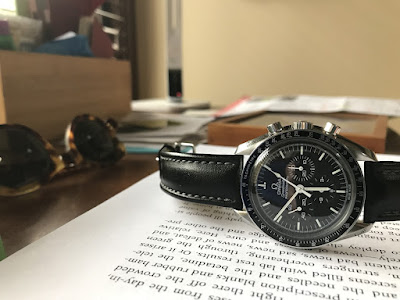 The Omega Speedmaster Professional got some time on the wrist this month. I do find, however, that I tend to wear my more water-resistant watches during the Summer months, because I know that the watch will be subjected to sweat and water more often. This strap that you see on the Speedy is one that I've had for over ten years. I thought it was time to put it onto a watch a leave it one the watch so that it would wear out over a few years. I have a few too many watch straps and it's time to start cycling through them. 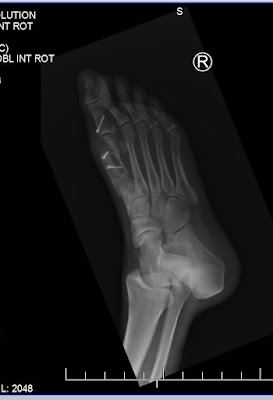 And that's it. This is the last post in this Post-Op Recovery series. I hope you've enjoyed reading it. The operation was such a long time coming that I began to build it up in my head into something more worrying than it needed to be. Looking back, it was a text-book procedure and it seemed to go well according to plan. The surgeon who performed the op was quite personable and I look forward to speaking to him again in a few months. Hopefully, the niggling pains that my feet are giving me will subside over time. I have to remind myself that full recovery can take a  year or so. The operation was September 14th. Four months ago. Still early days.
One last x-ray shot of my right foot. You can see the three screws clearly enough. The metatarsal bone where the two screws are located was the segment that was cut through along its length. The two separate sections were then spaced wider apart before the screws were inserted.
Ouch! In saying that, though, I can put my full weight on my right foot without any pain.
But like I say, still early days. I won't be doing any pirouettes on this foot just yet.
I hope 2023 has started nicely for you all, and I hope that this year treats you all kindly, and may the low points be minor ones.
Thanks for reading!
Posted by teeritz at 05:13