Black Days for Coffee Culture in Melbourne This Week.

It's been a tragic week for cafe culture here in Melbourne.

Adalberto 'Bibbi' Succi, the owner of Ti Amo Bistro in Carlton, passed away last Monday after a battle with cancer. He was 79. I worked at Ti Amo from 1993 till 1998. Bibbi was the definition of firm, but fair. He was a jovial and, at times, cynical boss to work for, but he was one of the best employers I ever had. This cafe had been known as The Black Pearl when it was first opened by two guys in the early 1960s. I'm not sure when the name of the place was changed, but Bibbi started working at Ti Amo back in 1977 and he became a part-owner a few years later. Sometime in the early Eighties, he became sole owner of the place. By then, it had become a Melbourne institution that served great coffee and plain and simple Italian food. No menus to hand out to customers, it was all written on a couple of large blackboards hung up in the corner of the room. With it's low lighting and timber furniture, it was a cozy place to grab a coffee or quick meal. The walls were adorned with posters for a variety of movies, festivals, plays, etc. People would sticky-tape them over each other, to the point where we would take a knife every six months or so and cut them down once the tape was no longer holding them in place. At the end of the year, we would remove as much of them as possible to try and get back to the bare walls underneath.
This was not a place for fine dining. This place was real. As such, it was a very popular cafe with students and lecturers from the nearby Melbourne University.
I made coffee for singer Nick Cave once. He had a long black. Made perfect sense.
Man, how many nights did I stand behind behind this bar churning out coffee after coffee after coffee? 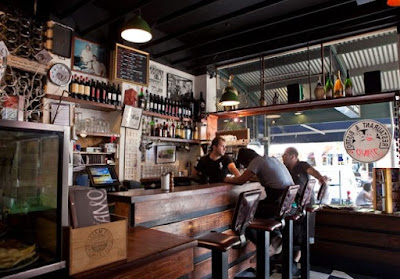 Two American guys came in one busy Saturday night. I looked over at them and my jaw hit the floor;
"You! You're Jay Sanders! You were in the first episode of  'Private Eye'. And you were in 'Crime Story'!"
The guy who came in with him said; "Man, does this guy know your whole resume?"

I turned to him and said; And you're Tony Plana! You were in an episode of 'Miami Vice'  where you jumped through a window! One of the bad guys."

pic  above courtesy of www.broadsheet.com.au

Star-struck, I asked them what they were doing here in Melbourne, Australia. They were filming a movie called Silver Strand. Jay Sanders then said that he and Tony had worked together once before on a very controversial movie a few years earlier.
"Basic Instinct?", I asked, even though I didn't recall seeing them in that movie.
"No. 'JFK' ", he replied.
They then asked for coffees, nothing fancy. Just a couple of our popular sellers. I made them a couple of lattes.
Don't think I charged 'em, either. Don't recall exactly.
And I think I may have served author William Gibson one time. Definitely looked like him, and he had an accent. He was in Melbourne in 1994 for a Science Fiction Convention. I'm sure it was him.

Ti Amo was an interesting place to work. Half of the tables had numbers. The other half had names, based on where they were situated in the room. The four-seater table next to the telephone was called telefono. The table against the wall below the framed map of Italy was called Sicilia (since Sicily was the lowest part of Italy on the map). The small two-seater was called piccolo (little).

I will admit that I had a chip on my shoulder back then. I was pushing thirty and still working as a waiter, with no clear direction as to where I was headed. My own fault. Thank God I had a girlfriend. I met her here. She became my wife.

Friday mornings at around ten am, there would be a steady influx of old Italian men who would come in and have a quick coffee. This was an unofficial meeting place for them and they would sit up at the bar and stay for 20 minutes or two hours. There were great to talk to, and they'd often correct my pronunciation of Italian words and phrases.
One of them was called Caruso. It was years later that I learned of his first name. Carmelo. This gentleman was 74. He would come in regularly, always dapper in a suit. His silver hair would be neatly combed, and he'd wear a gold pinky ring on his right hand. It was like serving Sinatra.
"Wei, damme 'na sigaretta"*, he would say, with a gentle tap on my shoulder. I'd pop open my pack of Marlboro Lights and light it for him with my Zippo.
He had a mild heart attack in the place one morning. We laid him down on the floor, on top of my trench-coat, as we waited for the ambulance to arrive. It arrived shortly afterwards and took him to hospital.

He was back in Ti Amo about a month later, ordering an espresso and asking for a cigarette.

I saw him once walking down the street with his brother, who was also decked out in a suit, with a short-brimmed fedora tilted at an angle. They looked like a couple of retired bank robbers.

Despite whatever cynicism or negativity I had about my work life back then, I will sometimes think back on my time at Ti Amo and smile. Or laugh out loud.

I'll be going to Bibbi's funeral on Monday.

Pellegrini's Cafe in Bourke Street is another well-known and much-loved establishment, often cited as the first place in Melbourne to set up a coffee machine, way back in 1954.
It too offers great coffee and good food. It's a long, narrow place, with a bar running the entire length on the right and a long, mirrored counter-top running along the left.

Picture below of the long bar courtesy of Trip Advisor.com.sg | Pellegrini's Melbourne

And when the place is full, as it often is, there's a table out back in the kitchen where you can sit and have a meal while the ladies cook a few feet away. 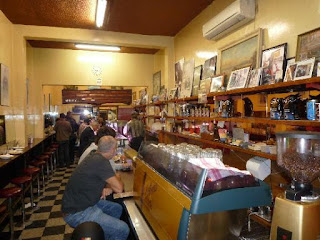 Occupational Health & Safety be damned!
It's one of the coolest dining experiences you can have in this fair city.

Sadly, there was an incident in the CBD on Friday afternoon at around four pm. A man set fire to his car in the city before getting out and attacking random strangers with a knife. One of the victims was Sisto Malaspina, the 74 year-old co-owner of Pellegrini's. He approached the car after it caught fire and was attacked by the driver, Hassan Shire Ali, who was later shot and subdued by police. Authorities are treating this as a terror attack, citing that Ali had ties to extremist groups and that he was also mentally unhinged. The car was later found to be filled with gas bottles.

Malaspina succumbed to his injuries at the scene. His death is a major blow to the cafe culture of Melbourne. Pellegrini's Cafe is, understandably, closed today (Saturday, at the time of writing) and I'm sure that the staff will feel the effects of this incident for a long time to come. Tributes have flowed through Twitter and some are asking for a State funeral for Malaspina, such was the impact that he had made on the city.
Malaspina was the life and soul of Pellegrini's, almost always seen greeting patrons, with his cravat loosely tied around his neck.
Last time I visited the place, with the family on a busy Saturday night, he ushered us into the kitchen where we sat at the table and had a quick pasta.
He will be sorely missed.

You can get a good cup of coffee almost anywhere in Melbourne. Competition is fierce and the quality is, for the most part, extremely high.
The one thing that makes the difference is the people behind the bar. The personalities of the folks who work in or own the place.
Melbourne lost a couple of much-loved cafe personalities this week.
Very, very few of them left.


* 'Wei, damme 'na sigaretta' - loosely translates into "Yo, give me a cigarette."

Email ThisBlogThis!Share to TwitterShare to FacebookShare to Pinterest
Labels: Food and Drink, Life