Cat in The Dentist's Chair, My Wallet is a Sieve, Smoke Gets In Your Nose + Recent Wristwatches. 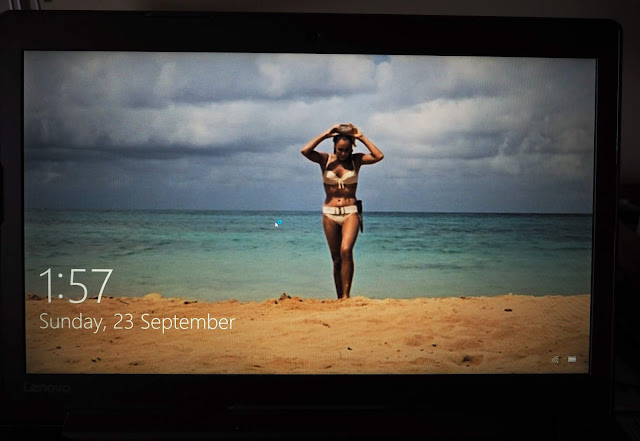 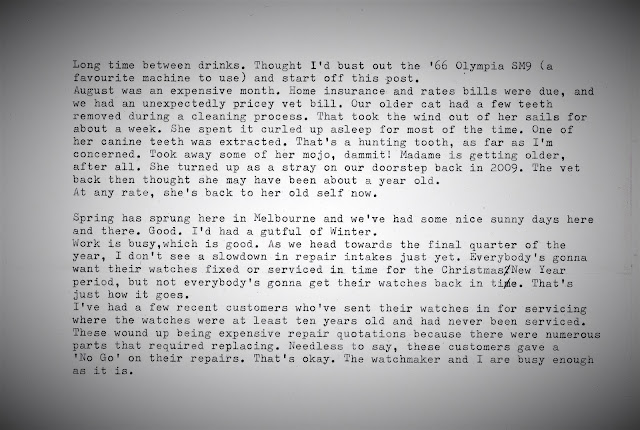 As a result of being so busy at work, plus the fact that the job involves staring at a computer screen for most of the day, I've found myself spending less time online in my spare time.
Which explains the reduced frequency of my blog posts these days. 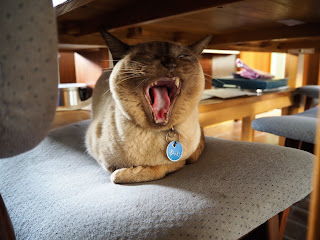 Say 'Aaah'. Here's a shot of Madame yawning. Right place at the right time. You can see that the left side of her mouth is missing the long upper canine. When we got her home, I noticed her making some chewing motions from time to time, with what appeared to me a confused look on her face.
When I took her back to the vet a week later for a follow-up visit, the gum had gotten swollen a little and infected. I asked the vet if there was a possibility that the cat's lower tooth might have been biting down on the tender area where the upper tooth had been. She said that this was a possibility. A round of antibiotics was in order. Thankfully, it all subsided a week or so after that. Still, just to play it safe, I think Dussy is off the super-hard foods from now on. Maybe some small dry food in the morning and softer stuff for the other meal. With her usual afternoon snack thrown in.

Watch-wise, I've been wearing the Rolex Submariner a little more; 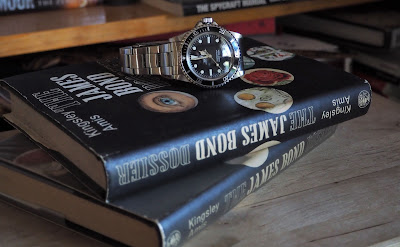 I managed to snag another copy of the 1960s Bond analysis by Kingsley Amis, The James Bond Dossier.
About 20 years ago, when I was working at the first Borders Bookstore in Australia, a lady came in asking about a hardcover copy of a George RR Martin book, I forget the title.
We didn't have it in stock and looking through the store's database, there were no plans for us to bring it in. It appeared to be out of print at the time. She went on to tell me that she owned a second-hand bookstore nearby. I took her details and told her I'd give her a call if the book ever showed up.
A few months later, we opened up a parcel of remaindered books sent to us from headquarters in The States and there in the box was a hardbound copy of the book that this lady had asked about months before. I made a mental note to check it out once it had been processed into the system and priced.
A couple of days later, the book was in our bargain section, selling for the princely sum of $3.50.
I bought it at the 30% staff-discounted price, put it in a bag and spent my lunch hour walking over to the lady's second-hand bookshop nearby.
I walked in, reminded her of who I was, and then handed the book over. She was ecstatic. "How much do I owe you?, she asked, beaming as she looked at the cover one more time.
The book had cost me less than a cup of coffee.
"Don't worry about it", I replied as I began to turn to leave her shop. She thanked me again and we bid our goodbyes. As I made my way to the door, I spied a copy of the Amis book on display.
"How much is the Amis book?", I asked, pointing to it.
She picked it up of the shelf, flipped open the cover, glanced at it and then said; "It's yours. Take it."
We did the old 'Oh, no, I can't/ Oh, yes, but I insist' dance for a moment or two before I accepted the gift and she wrapped it up in brown paper.
It was a win/win for the both of us.
When I got it home later that evening, I unwrapped it and flipped it open. The price was written in pencil in the top corner of the verso page - $65.oo.

A few weeks ago, I was in a thrift store when a checked the bookshelves and found a handful of old Bond paperbacks. In amongst them was a hardbound copy of the Amis book.
I flipped it open and saw the price- $1.oo.
Hmm, an absolute rip-off compared to what I paid for my first copy, but an absolute bargain nonetheless. I took it over to the counter and gave them two bucks.

I came across an Oris Artelier Hand-Wound last month; 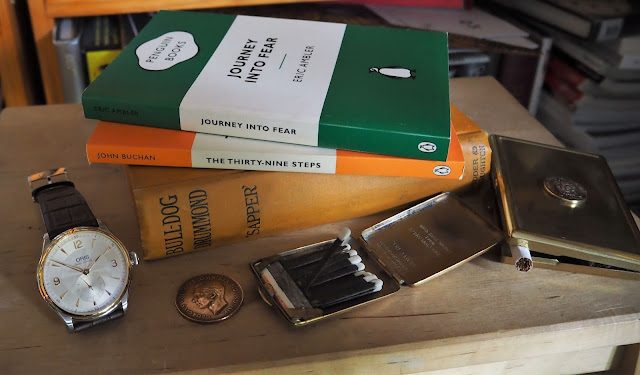 Despite its 40mm diameter - a modern concession - the watch exudes an old-world charm. Powered by the 17 jewel Peseux 7001 hand-wound calibre, it has a power reserve of 42 hours and will run very accurately. 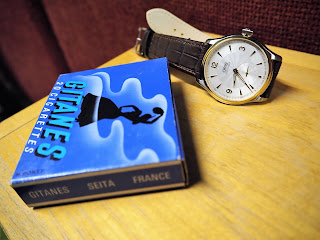 Perhaps its one drawback may be the tendency for the mainspring to snap if the watch is aggressively over-wound. There's an easy way to avoid this. Count each turn of the crown as you wind it. Everybody will get a different number depending on how fully you wind each turn. I get around twenty full winds. I wind the watch in a normal manner, the way my Dad used to, with his Wyler Incaflex back in the '70s. When I get to fifteen turns, I continue winding, but in a slower fashion. Five more slow turns and I feel some resistance in the crown.
Done. The watch is fully wound. 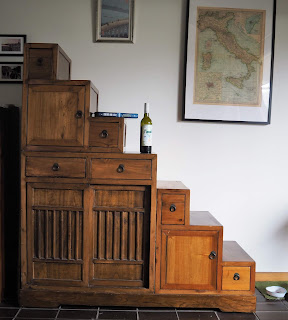 My wife and I were watching a Japanese-style step cabinet on eBay last week. I put in a bid before heading off to work that morning and we ended being the winning bidders. That was the easy part. The hard part would involve taking both cars and driving out to the other side of town to pick it up. Half of the relatives on my Dad's side lived out that way and I have strong memories of going out there back in the '70s and '80s. This would be a trip down memory lane. Some areas looked the same as they did back in 1976 and some didn't.
The piece comprised of four parts. The large section (with the wine bottle on it) was able to be fitted into my hatch-back while the other two drawer units went in the back-seat of my wife's car. The rectangular base section slotted in to my car next to the large piece.
These types of pieces were used in Japan in days of old. Like the name suggests, they doubled as staircases to elevated levels of homes. The wood, usually a light timber such as pawlownia, was used so that, in the event of an earthquake, it would pose a lesser risk of crushing you.
This piece is not a genuine Japanese antique, but a reproduction. Yes, it has seen better days, as there's evidence of it having been repaired here and there, but it should suit our needs just fine.
Now we just have to get rid of some other bits and pieces that aren't being used to their fullest potential. 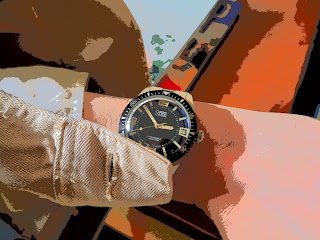 I've been wearing the blue/black Oris Diver Sixty-Five a lot lately. The watch now has some nice scuffing on it which is consistent with its age (November 2016) and its regular use. This is, after all, what a watch is meant for.
And yes, I've said it a few times over the last couple of years, but I'm gonna have a decent stab at getting rid of some watches that don't get worn enough. I can think of one or two right now that will be first cabs off the rank. 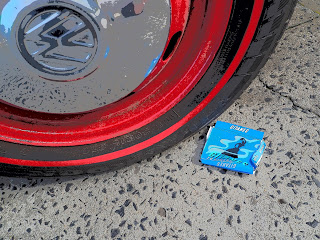 This picture here was a test shot for the review that I'm writing of the Diver Sixty-Five. The review is about 80% finished. Just a couple more aspects of the watch that I want to write about, a little tweaking of what I've written already, one or two more photos to take and then it should be done.
Coming soon to this very blog!
The Gitanes pack that you see here is a photocopy of the real one, shown above in the photo with the Oris. I didn't want to destroy the original -which I've had since around 1990- so I figured I'd try making a copy printed on some card stock that I had. Some strategic folding, a few staples and it was done. Turned out surprisingly authentic, I must say.  Seemed almost a shame to then crumple it up for the sake of a photo. Sometimes, I go to a little too much trouble for a picture. Ahh, well...

Here's a watch I haven't worn much since last Summer, the Omega Seamaster Planet Ocean; 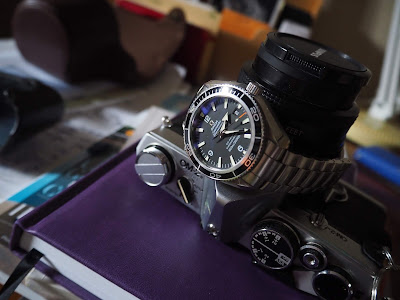 The Olympus OM-2n SLR has a roll of film in it. Wish I could remember what photos I took. 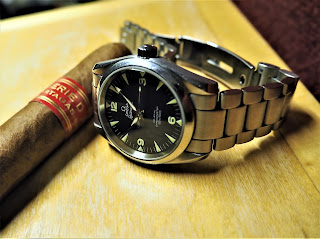 We had a work function at a cigar lounge this week. I declined to have a stogie and opted for a cigarette or two instead as the night wore on. A colleague started off with a Partagas Serie D and took about 90 minutes to finish it.
He then had another smaller cigar a little later. On the way back to the office, where our cars were parked (NEVER take one car to events like this), we had to pull over so that he could throw up.
And that's why I declined to have a cigar.

I got home at around 1:00am, and quietly got into my pyjama bottoms and a T-shirt in the study, so as not to wake up my wife.
Had a shower next morning, got dressed, put on my Omega Railmaster, ate breakfast and went to work.
And I could still smell cigar smoke. It must have gotten into my pores! There must've been an oily coating on the inside of my nostrils or something, because, for the next three days, I could still smell the aroma of these fine Cubans.
I kept thinking to myself; How do these regular cigar smokers do it? They must reek of the stuff!
The one that I was given on the night stayed nestled in the breast pocket of my jacket. It sat on my desk at home for a day or two and then I took it in to work and gave it to my boss. He likes a stogie from time to time. 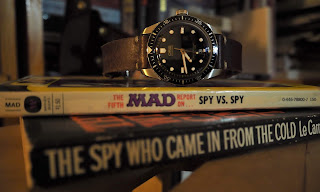 Thanks for reading, and have a great week ahead!