I spent most of this weekend clearing my desk. Hopefully once and for all. Business cards that I've accumulated over the last few months were put into a card index box, to be dealt with at a later time. Various notes and other jottings were either thrown away or transcribed into other notebooks for posterity or future reference.
I got sidetracked numerous times by some obscure note that I wrote ages ago or some article torn from a magazine. The OUT tray was filled to the brim with info that I no longer found interesting or relevant. The paper recycling bin therefore filled up pretty quickly.
When all was said and done, though... 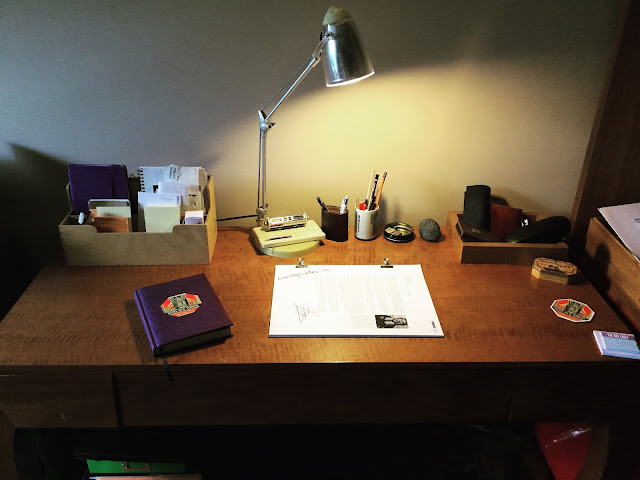 It hadn't looked this tidy in quite some time. I took the IN/OUT trays off the desk and positioned them on top of a small steel IKEA drawer unit that sits next to the desk. Over on the left is a letter caddy which holds notepads and index cards while the right rear edge of the desktop has a small wooden catch-all. This is where my wallet, phone, car-keys and glasses are parked when not in use.

An old IWC watch catalogue works as a blotter in the middle of the desk. As each page gets covered in jottings and scribbles, the page is torn off and thrown out.

To the left is my diary/planner. Under the desk on the left-hand side is a small box filled with various props for photo shoots. On top of that are a few manila folders, and my laptop sits on top of these when not being used. Against the wall under the desk is the Olympia SM2, for when I need to type something like a typecast, etc. Because the desk has been so cluttered for so long, though, I've tended to type in the kitchen using one of my other typewriters. So, this SM2 hasn't seen much action.
I'll see if I can change that.

The BaselWorld Watch & Jewellery Fair is currently in full swing. This yearly event is a must for watch nerds, as the Swiss watchmaking houses unveil their new models. 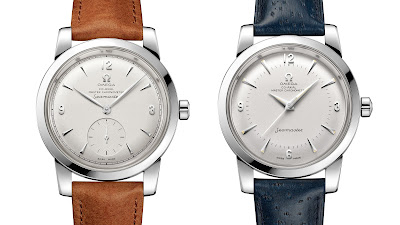 While I have a soft-spot for Omega, this brand only released one (or rather, two) watches that got my heart beating a little faster - the 70th Anniversary Seamaster models (right).
The one on the left - with the sub-seconds dial- is based on the first Seamaster from 1948, while the central seconds model shares design elements with the later Seamasters of the early to mid 1950s. Measuring a sublime 38mm in diameter, these watches house the latest in-house Master Co-Axial movements from Omega.
These two will be released as limited editions of 1,948 pieces each. That's a shame. These could have been produced as regular production models. I think they'd sell quite well.

Two brands that really caught my eye this year were Oris and Tudor. Oris had a runaway success with the introduction of their Diver Sixty-Five range in 2015. The release of their commemorative Movember Special Edition late last year created quite a buzz, so it seemed inevitable that they would follow this sought-after piece with a range that borrowed some elements of that watch, but with a few twists. 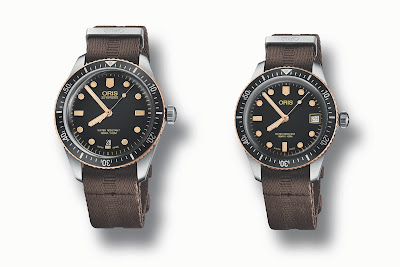 At first glance, these two watches look exactly like the Movember Edition, but when you look closer, the differences begin to appear. Firstly, the inlay of SuperLuminova compound on the hands and dial markers is off-white, to give the impression of faded or aged lume. This use of what collectors refer to as faux patina has been all the rage in the watch world over the last few years and some brands can tend to go overboard with it. Here, though, it goes extremely well with the rose-gold plated hands and marker borders, giving the whole dial a lovely warm look, reminiscent of some dive watches of the 1950s and '60s, the most notable being Rolex and Tudor Submariners of that era. However, this design is based on an Oris model from the mid-1960s, hence the Diver Sixty-Five designation. 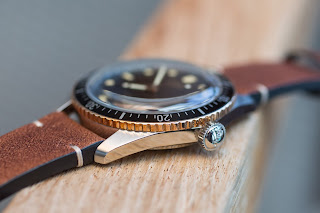 The most noticeable difference between these models and the Movember one is the bezel. For this new model, instead of steel, Oris have opted for a bronze bezel. It starts off with a polished rose gold hue, but as it continues coming into contact with air and other elements, it will develop a varying level of patina and verdigree that is common with metals such as bronze or brass. While it is easily cleaned with lemon juice, vinegar or bi-carb soda, many watch nuts with bronze wristwatches tend to leave the patina alone until it resembles some artifact recovered from The Titanic. 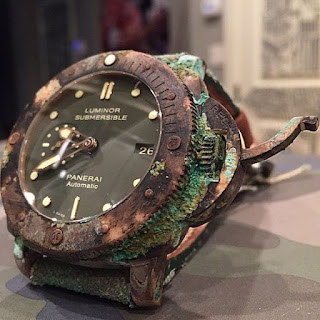 I don't mind a little bit of patina, but this would drive me nuts. I'd be tempted to clean it once a week, at the first signs of this forming. It usually begins as a slightly dull and pale brown before darkening and then turning a bluish green before it continues until it looks like the watch has rusted. This watch here would have taken quite some time to get to this level. Kudos to its owner for being able to put up with it.

However, a quick dunk and/or light rub with organic cleaning solutions, such as the aforementioned lemon juice or vinegar, and the watch can look good as new.
Me? I just don't think I'd have the time or, more likely, the inclination to clean my watch on a regular basis.

Back to the Oris- this new model will be available in both a 36mm and a 40mm case size. This should appeal to a wide range of customers; women who want a cool looking dive watch, collectors who prefer the vintage dive watch size - there was a slew of dive watches made in the 1960s in 36mm sizing - and guys who have smaller wrists that are better suited to this smaller case.
For those who would consider 36mm too small, the 40mm case size awaits. I think these will do very well.

Tudor was the other brand at BaselWorld this year that released a couple of pieces that nobody was expecting. First up, the Black Bay GMT model. 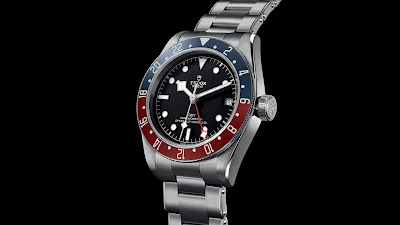 Sure, it may incorporate design elements of the classic Rolex GMT models of the past, but Tudor has done much over the last five or so years to really distance itself from the company that used to be its big brother.
Tudor watches of the past were designed using the same external parts as Rolex. The main difference was the movements. Whereas Rolex watches had in-house calibres under the bonnet, Tudor used ETA movements. This made them affordable for many.
The Black Bay series of watches has the classic Tudor 'snowflake' hour hand, which has become as famous and recognisable for the brand as the 'Mercedes' hour hand has been for Rolex.
This GMT model measures 41mm and features the 'snowflake' motif on both the seconds hand and GMT hand, aside from the hour hand. Again, I think this one will be a popular watch. 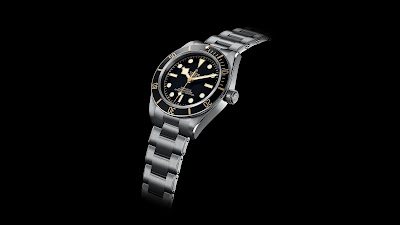 Another Tudor release this year was the Black Bay 58. This one made me sit up and take notice, for the sole reason that it is being offered in a 39mm case size. This puts it firmly into vintage Tudor dive watch territory because those watches were of a 39mm diameter in days gone by and this Black Bay model pays homage to the first Tudor dive watch, released in, yep, 1958.
This model has a nice gilt dial and hand-set which perfectly contrasts with the deep black dial and bezel insert.

The last three or four years have seen a resurgence in vintage-inspired pieces from many of the larger Swiss watch houses and it would seem that there's no chance of this trend abating just yet
What I'm happy with is the return to more conventional watch sizes. Sure, it appears to be happening slowly, but it's good to see it happening, just the same. Aside from the brands listed in this post, it would seem that many others are offering their latest line-ups in a variety of sizes to suit a wider range of people.
Now, I will be the first to admit that these watches are pricey. They require some serious saving. What they give you, however, is a wristwatch that will last generations and can be handed down. Provided that the watch is properly maintained, serviced when it ought to be, and not banged around with reckless abandon.

Okay, that went on longer than I had planned.

Here are the watches that I've worn recently; 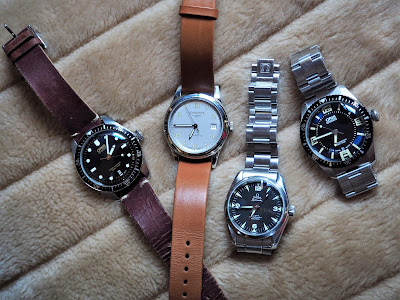 From left to right, The Oris Movember Edition Diver Sixty-Five has seen a lot of time on my wrist. I took the leather strap off it after wearing it for a day and put it on a no-name, straight-ended stainless steel bracelet. This gave the watch even more of a vintage vibe.

The Longines Heritage Expeditions Polaires Francaises got the 'vintage explorer's watch' touch when I put this tan-coloured leather strap on it. This was a $30 eBay buy and it really suits the watch. I may have to snag another one at some point. Although, I've been thinking lately that it's probably not such a good idea to stock up on leather straps since the leather can tend to dry out over time and become weakened. Which is the last thing you want. I've seen a few straps that look brand new, but the stitching has given way where the buckle is attached. So, I think I'll keep my strap supplies low. Of course, it would also benefit me if I can leave a strap on a watch for longer than a few days. Give it some worn-in character.

The Omega Railmaster hasn't had much of an outing for a while. I realised last year that I tended to wear my bracelet watches more during the Summer months while my watches on straps got more of a showing throughout the cooler months of the year.
Last week, though, I just had a hankering to wear the Railmaster. I still think this watch is a better design than the current model that was unveiled last year.

Rounding out last week's wristwatches was the Oris Diver Sixty-Five with the blue/black dial. 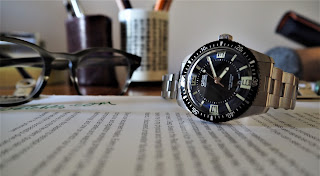 And that was last week. It's now almost 8:30pm Thursday night on March 29th. This has been a very busy week at work as the BaselWorld releases landed at the office and I spent a couple of days away from repairs as I packed watches to send to various retail partners. I think some of these new pieces will do very well indeed. 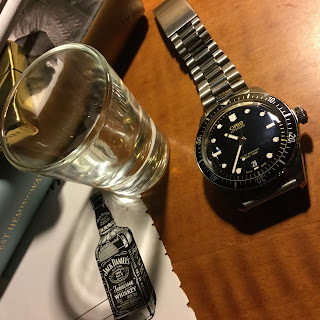 Throughout this week, I stuck to one watch,  swapping from the Diver Sixty-Five to the Movember Edition, which I still had on the steel bracelet.
I started this post last Sunday night and worked on it a little each night. It's now late Thursday night, a couple of minutes to 11:00pm and I think I'll hit the sack.
We're going to catch a session of Ready Player One tomorrow. I haven't read the book, but my wife has.
Should be interesting to see Spielberg's take on it.
Anyway, I hope you all have a nice break over this Easter weekend. If you don't celebrate Easter, then enjoy the time off.
Thanks for reading, all!
Posted by teeritz at 05:03