Okay, I've been back from Thailand now for over a week and I still have a nagging cough associated with the 'flu that I caught while I was there. Ahh, well, there are worse ailments I could have. And this too shall pass.

Last weekend
Who remembers? But I was wearing the Omega Seamaster from 1962. I had worn the Sinn 103 chronograph for over two weeks and felt like something lighter and simpler; 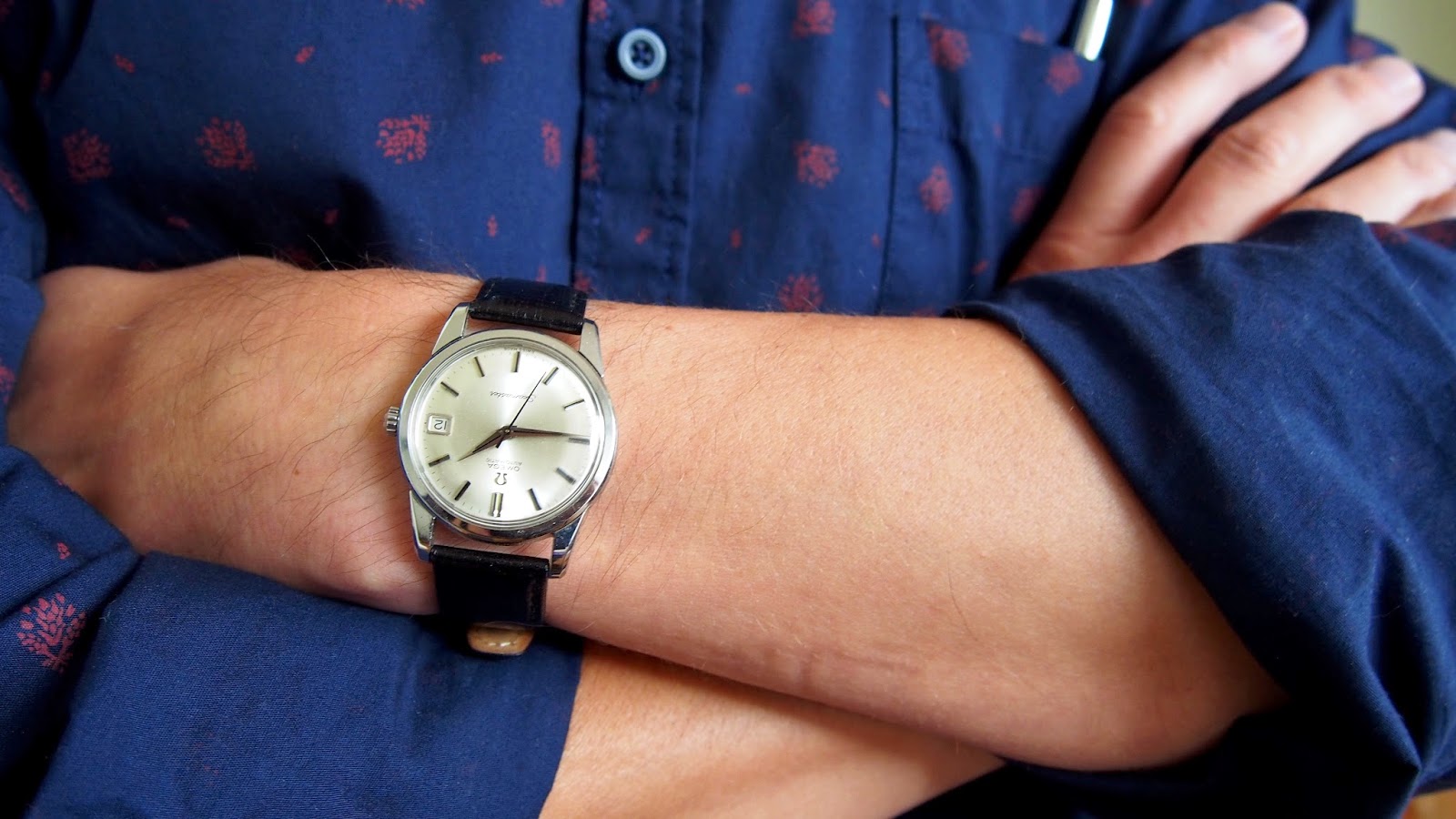 Hmm, not a great photo. Here's how it's supposed to look, photo courtesy of my hard drive (which is fast filling up with photos); I switched over to the Omega Railmaster. The money clip was more for effect in this photo. It's a basic stainless steel clip with different coloured shell segments glued to it. I liked how it looked, even though I don't tend to use a money clip. Bought it at Jatujak Weekend Market in Bangkok for about six dollars and haven't used it since we got back, but I'm sure that there will be days when all I need to carry is my driver's licence, a credit card, and a twenty dollar note. That should keep me out of trouble. 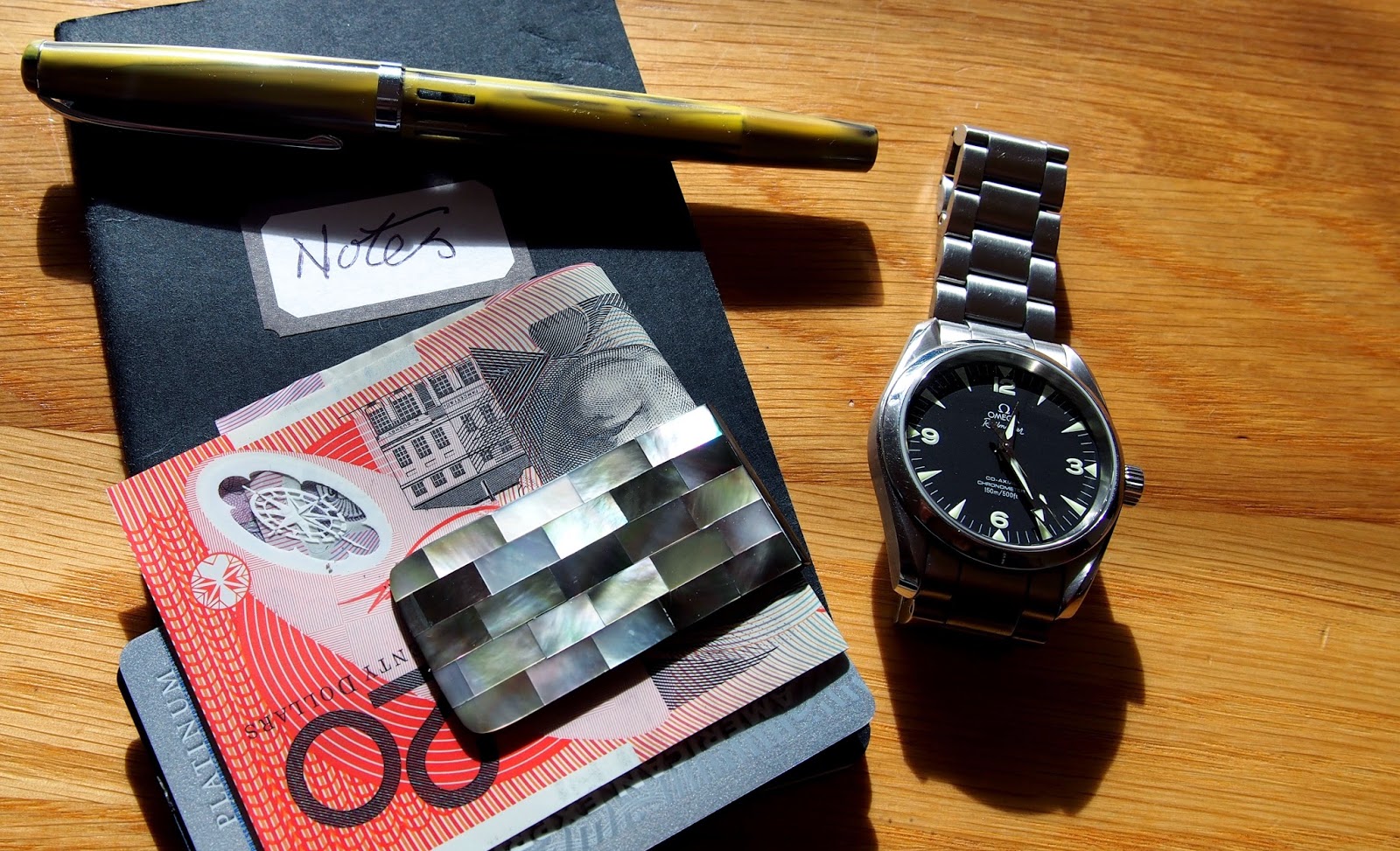 Wednesday
A new semester of classes started today. I've signed up for three modules. One of them concerns Health, Safety & Security in the workplace, another has to do with preservation & conservation of library items, and the third class is all about using internal network resources to obtain information. I'm looking forward to the preservation and conservation class, since this one has to do with repair and restoration. We'll be going to view a copy of a Gutenberg Bible next week. It's currently on loan to a university.
I was a little concerned that one of the classes wasn't showing up on my online timetable. I've already paid to do these three subjects this semester and I wanted to make sure that I didn't miss any classes. Turned out that this class doesn't begin until Week 41. I am currently in Week 29. Would have been nice if they had told me this when I enrolled. Perhaps they did, but I went in to enroll the day after my wife flipped her car last month, so I may have forgotten. No matter. I have a hectic few months coming up and it's probably better if I do the bulk of two subjects rather than three.
Speaking of my wife's car, now I remember what we did last weekend. We went hunting around for a replacement. I have to say that used car salesmen are depicted in popular culture as snakes for a reason. Because a lot of them are.
We wound up dealing with a pleasant fellow who had a red version of my wife's Toyota for sale. It was in reasonably good condition. I took it to my mechanic who gave it a quick once-over on the hoist and said; "It's a pretty honest car."
He gave me a list of things that would need to be taken care of in order for the car to be deemed roadworthy. They were minor, but necessary. I gave this list to the seller. I didn't haggle over the price, but I did expect that he would get these things taken care of before my wife took delivery of the car. I suppose we'd find out soon enough.

Thursday
I drove my wife to work, but we got there about 20 minutes late. Apparently, a fruit truck lost a load of apples when it hit a sound-wall on a major freeway at 4:30am. This had a ripple-effect on traffic along major parallel roads for about six hours, causing bumper-to-bumper grid-lock along nearby intersections. Anywhere we turned, we saw lit-up brake lights. Although, once we turned at the last major intersection, the road was pretty clear.
When I got home, it was time for a wristwatch change; 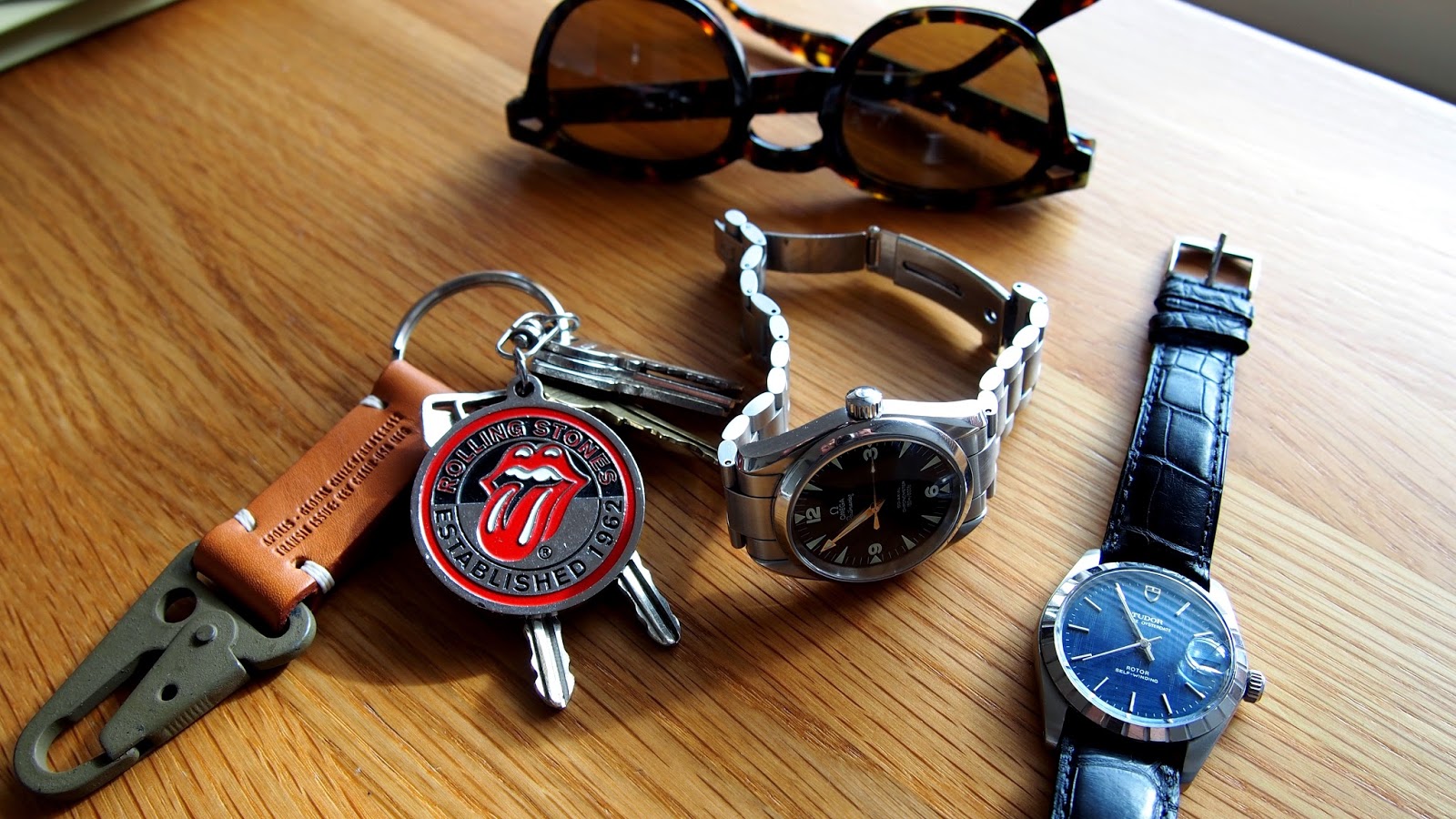 I got out the Tudor Prince Oysterdate. I haven't worn this one for quite some time. I had the dial changed over from a black re-paint (the eBay seller didn't mention that he'd had the dial redone. It was an okay job, to be sure, but clearly not exactly like the real thing) to a blue linen dial that I'd acquired some time ago. The dealer who had the work done for me neglected to tell me a few things about the finished repair and I have to say I'm not happy about the work that he did. I'm in two minds about this watch. Do I sell it as is, obviously mentioning to a prospective buyer all of the watch's faults, or do I keep it and try to get it back to all original parts?
It is a nice looking wristwatch. Dates back to the mid to late 1970s, I think, but it will require some work. Ah well, something to deal with at a later stage. I really like the linen pattern of the dial, however; 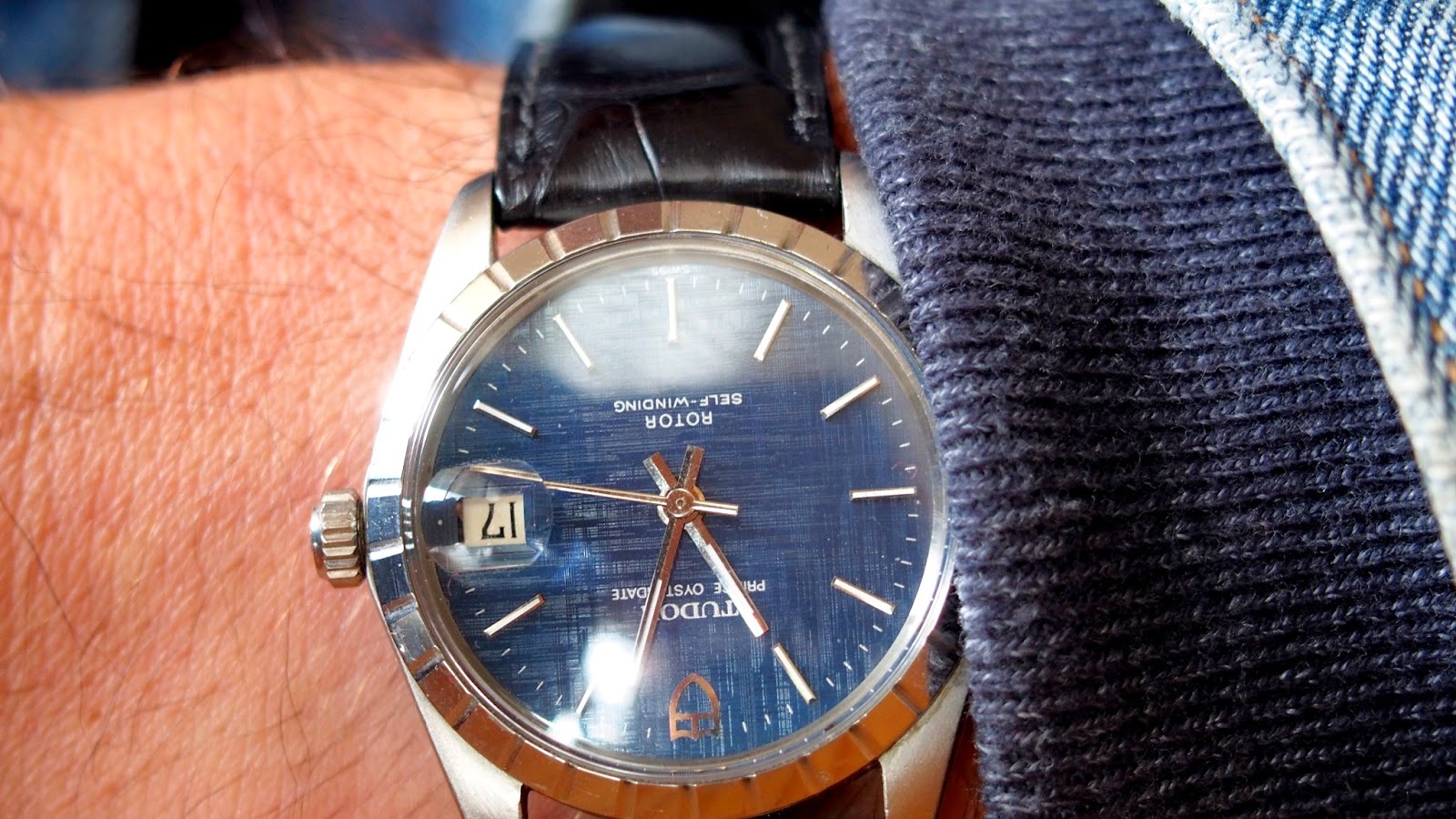 Later in the afternoon, my wife's car was ready to be collected. I picked her up from work and we headed over to the lot and took a look at it. It had a few paint chips along both sides and these had been taken care of by a detailer. However, the bonnet (hood) had numerous little chips along it. I asked the dealer why these hadn't been attended to. "Oh, you didn't mention that when you looked at it the other day", he replied.
Ah, and the dealer doth become the snake, I thought  to myself.
When I looked at the car the other day, it had just rained. Whereas gravity allowed the rain to roll down the sides of the car, thus showing the scratches on the doors, the bonnet was covered in fine droplets of rain, which disguised the paint-job.
The dealer, after I politely reminded him that I didn't haggle on price the other day, offered to go halvies with me on the cost of getting the bonnet touched-up and detailed. I gave it about thirty seconds of thought. My wife stood firm. She didn't want to take the car is it was, but we both knew that she needed a car sooner rather than later. He told us we could drop it off to him any day and he'd have it ready for us 24 hours later. Good enough, I supposed.
I paid him the remainder, in cash, and we took delivery of the car. I was a little nervous as my wife pulled out of the dealer's lot, thinking about the irony of some other distracted driver coming along and rear-ending her new car just seconds after she's gotten it. Paranoid, aren't I?

Today
Woke up coughing. This damn 'flu! Time to pay some bills. My car registration is due early next month, but I figured I'd pay it early. Seven hundred and fifty seven dollars later, ouch! I drive a 1993 Toyota Corolla hatchback. Sure, it's not glam, but this little car has been a friggin' workhorse over the almost ten years that I've had it. It doesn't drive as smoothly as it once did and I may look at getting something else sometime in the first quarter of next year, but for now, this thing runs well enough. Although, another summer without decent air conditioning may just push me over the edge.
I also paid a $180 speeding fine. Bastards. It occurred on a downhill stretch of road where the speed limit is 70kph before it abruptly changes to a limit of 40kph. I'm sure this catches out many a driver who doesn't want to ride the brakes on the downhill slope. I was, apparently, doing 48 k's in this 40 zone. And I also got one demerit point. Bastards. With a full licence (i.e.-somebody who's been driving longer than the probationary three years),  you start off with 12 points.
"If you get 12 or more demerit points in any three year period, you may lose your licence." That line is straight off the VicRoads website.
I fully understand the purpose of all of this, but I am a pretty careful driver. I keep my nose clean, which is why it irks me whenever I lose a point. Granted, it hasn't happened often throughout my 30 year driving life, so I suppose I really don't have anything to worry about.
There was an uproar about speed cameras about a year ago. This service is outsourced to local councils instead of being done fully by police and many of these traffic officers would park out of sight of oncoming traffic. This meant that they were clocking up huge numbers of speeding motorists. Somebody argued, therefore, that, since the presence of these cameras wasn't clearly evident, this did not provide a deterrent for speeding motorists, and it was therefore seen as an obvious attempt to gain revenue.
These traffic camera operators park their nondescript cars on the nature strip. The speed cameras are mounted on the front grille. All they have to do is sit there and read Playboy while the speed radar and camera do all the work.
I read of a funny incident where two guys approached one of these cars and began speaking to the traffic officer behind the wheel, asking him a bunch of inane questions. Meanwhile, they had an accomplice who crawled underneath the car and unscrewed its licence plate.
They then attached this plate to their own car and drove over the speed limit past the traffic officer's car a total of seventeen times. The council later went through its procedure of sending the speeding fines out in the mail to the offending driver and they were very surprised to receive seventeen speeding fines in their letterbox a few days later.
Score!

Anyway, I was a man on a mission today, so I switched over to the Omega Speedmaster Professional; 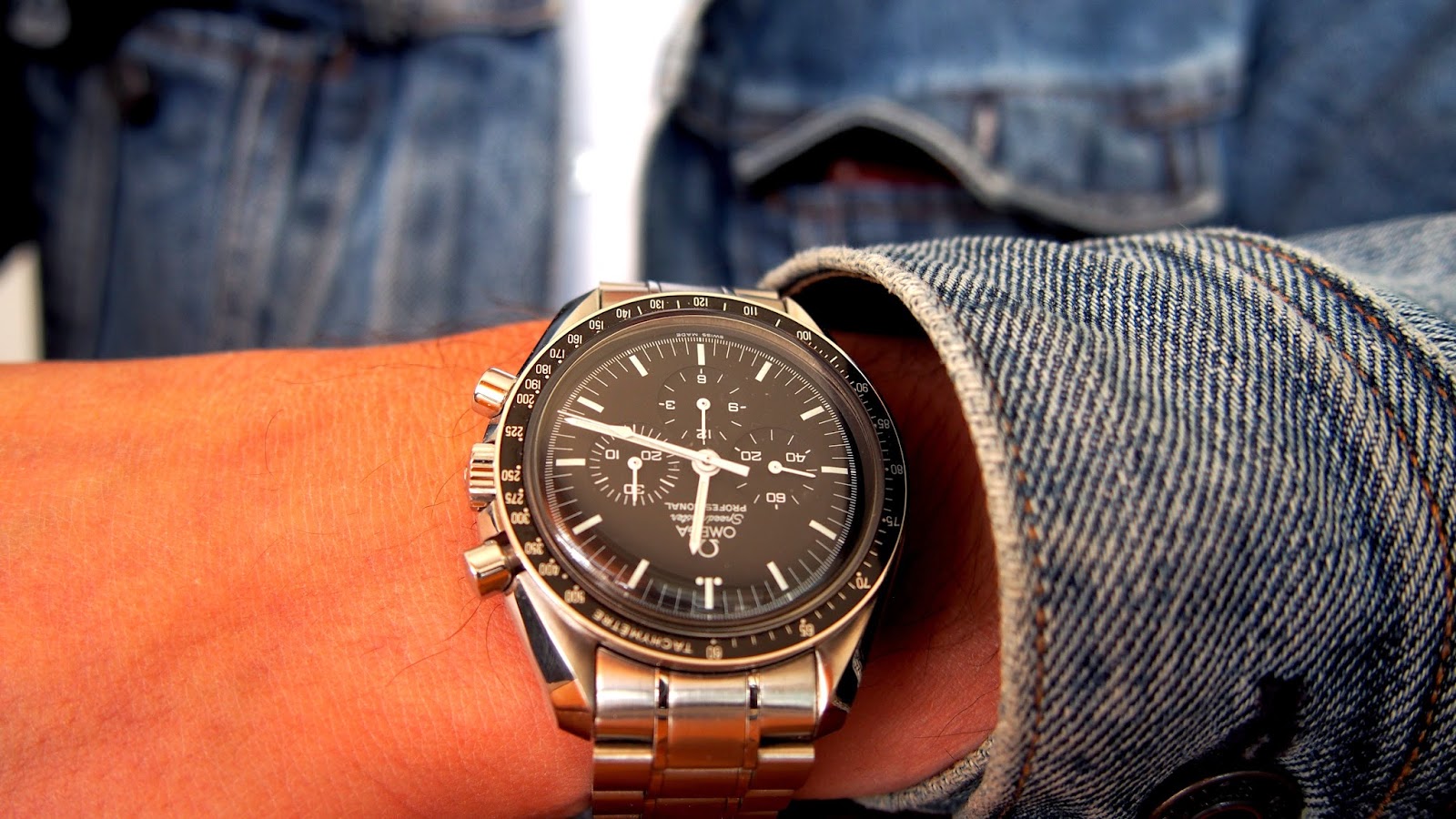 I set the camera's countdown timer and twelve seconds later; 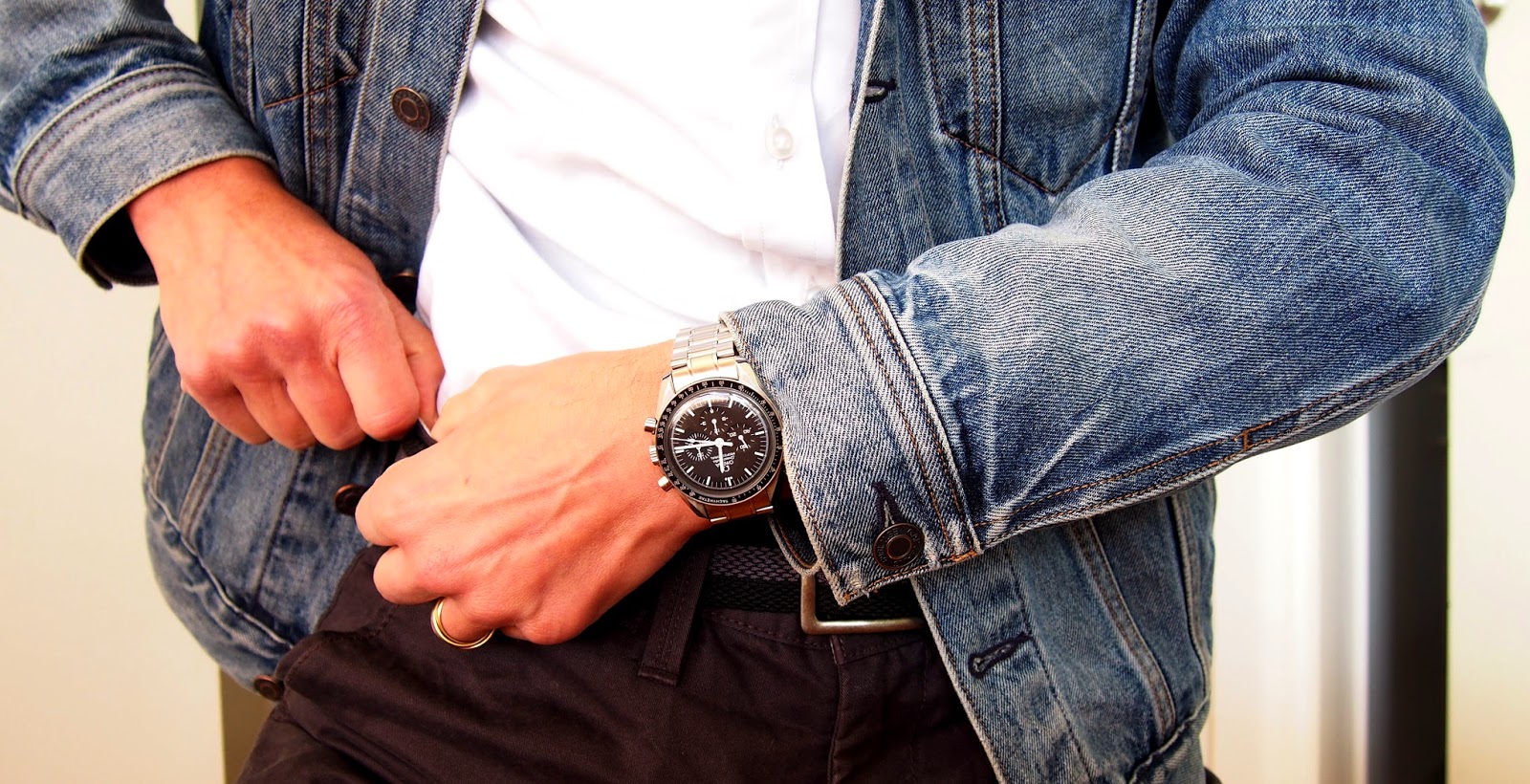 And that's another week wrapped up. It's freezing here in Melbourne, but the sun is out. What kind of sick joke is that, Mother Nature?
However, Friday night means pizza night in our house. I got the bases, some salami, some shredded ham (in case my son decides that's what he'll have), and some mushrooms for my one. We're all set.

Thanks for reading and have a great weekend, all!
Posted by teeritz at 00:17