I had read good things about the SM9 from various members of The Typosphere. I have also read that Paul Auster used one to write most of his fiction throughout the '70s and '80s. He even wrote an entire book about his SM9. That's dedication for ya.
The Olympia SM9 has also featured in "Ruby Sparks" (Dirs: Jonathan Dayton, Valerie Faris, 2012), the story of a struggling young writer (who uses a SM9) who dreams up his ideal woman...who then comes to life. 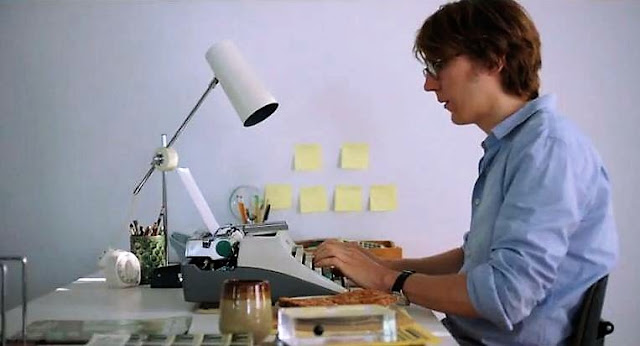 ABOVE- Paul Dano as Calvin, a young author crippled by Writer's Block. At least he has an Olympia. And it's a pet hate of mine when a wristwatch doesn't sit properly on the wrist. He's wearing it a tad loose. A watchmaker's hole-punch can fix that.

Anyhow, the SM9 series had a solid reputation and there was one for sale on eBay with a low "Buy It Now" price. The seller stated that it was not in working order. I wrote about it last week...

...and many of you offered suggestions as to what could be wrong with it. Basically, the carriage was not moving and I had hoped that it was nothing more than the carriage lock being engaged. Alas, this was not the case. 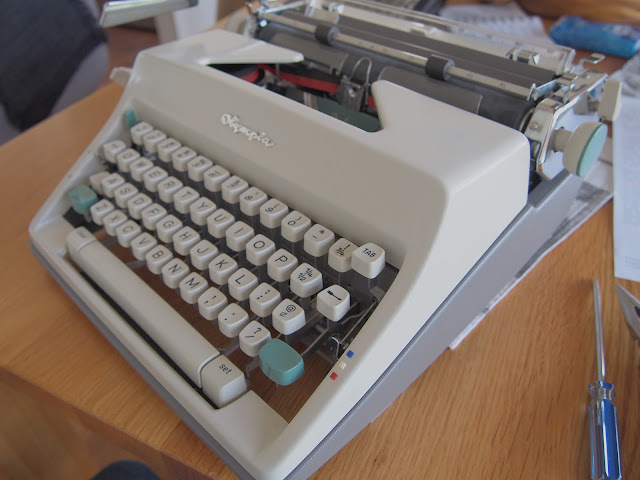 The typewriter arrived yesterday morning and I was surprised and delighted by how clean it was. I got the impression that it wasn't used much. The draw-band was made of a strip of white cloth and had no stains or grease/oil spills on it. No scratches or scuffs on the bodywork. Nice two-tone case with an off-white upper half and an Lettera 32-ish shade of green on the lower half. And it was made of steel, too. I'm not up on the history of typewriter development in the same way that I am with wristwatches, but it seems to me that many brands were switching over to plastic bodies around this time.
I'm betting that this machine is a circa 1966 vintage, based on the 3155257 serial number. I've checked out Ted's Typewriter Database and there doesn't seem to be a listing for the SM9s, but many of you have similarly numbered models and have pinpointed the year down to around 1965 to 1968. I'm hoping this one is a '66 model. Looking at my collection, I seem to only have one model from the Sixties, a circa 1960 Olympia Splendid 99. I suppose another model from this era wouldn't hurt. And it has such a nice mid-Sixties design aesthetic to it.
I'd almost expect to see it sitting in Miss Moneypenny's flat or Virgil Tracy's office.

I tried to type on it. The typeslugs all hit the same spot on the platen. Yep, the carriage was locked dead-centre, but the lock was off. I used a little force on the carriage...and heard it make a God-awful scraping sound as it slid across the body of the typewriter.
'That doesn't sound right', I thought to myself.  I grabbed a torch (flashlight) and shone it down the length of the underside of the carriage. All the teeth on the carriage rail were present and correct. None were bent, chipped, worn-down or missing.
I put the typewriter back in its case and tried calling Zack, one of the repairers that I know.  Actually, Zack represents 50% of the typewriter repairers that I know. He wasn't home. I would try calling him again tonight. Looks like this SM9 would require a service to get it going as it should.

No matter. I knew it may possibly require attention when I bought it. And if it types anywhere as nicely as my SM2 and SM3, then it was money well-spent, regardless.

Got up this morning and the sun was shining. Autumn is a little late this year, but the bright sunny days have been few and far between over the last two weeks ,so it seems that Summer may be well and truly over.
Still, the sunlight gave me a chance to have a better look at this machine in proper daylight. 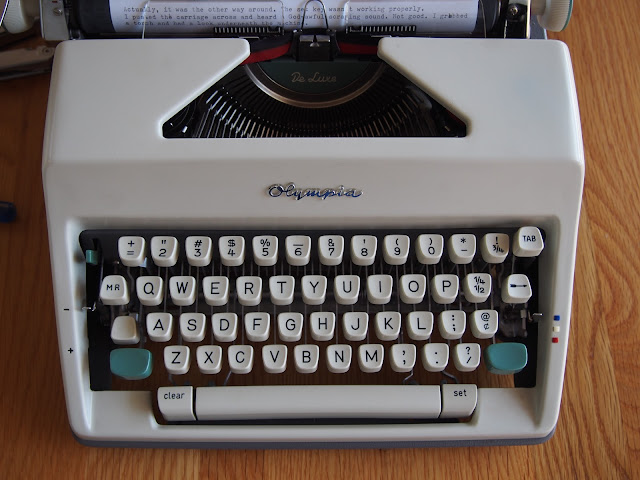 Like I said above, the carriage rail had no visible issues, but something was making a shocking scraping sound when I moved the carriage across. Y'all must be hating reading that, but I had to get a look at as much of this machine as I could. Besides, it's German built. I could probably drop this typewriter off a building onto a land-mine and it would still work.

Some of you had suggested that the escapement might be the issue, but I had a good look at it and it seemed to be working as it should. Everything worked smoothly when the space bar was depressed and there didn't appear to be anything blocking it. And so, I kept looking at other areas of the machine.

And, after staring at almost every inch of this typewriter, I noticed something. The TAB setting key would not depress fully, whereas the TAB clearing key would. Space bar worked normal too, but the carriage wouldn't move.

Time to get some tools out. A Leatherman WAVE and a Toledo 117-4 screwdriver. Don't ask me what's so special about this screwdriver, I just like saying 'Toledo'.

I laid the typewriter upside-down onto a placemat, ensuring that the carriage return lever hung over the side of the table, and undid the four screws that held to case to the machine. I then carefully turned it over and removed the ribbon cover (should'a done this first).

The case came away pretty easy after that. I tried pressing the TAB set key and looked at the rear of the machine while I did so. That's when I noticed a small steel rod move a couple of millimetres. This TAB mechanism on the SM9 works differently to my other, older Olympias. This one looks more like an Olivetti Lettera 32, where you have an arrangement of pins running along the rear length of the carriage and a metal rod pushes one of these pins in when you set the tab and another rod pushes the pin out, from the opposite side, when you clear a tab.
Looked at from behind, the TAB set rod curved to the right, whereas the TAB clear rod was upright. Okay, things were beginning to get interesting. Now, based on what I understand about German design and engineering, this piece didn't look deliberately shaped in that way.
Not only that, but I saw that this curved piece of steel was also touching against the pins. This would account for the scraping sound. I was beginning to suspect that this area had received a nasty knock at some point.
A few minutes of setting and clearing tabs to establish how they worked (or didn't) and I then reached for the Leatherman and unfolded the pliers.

"I'm goin' in", I said to the kids, who were sitting in the lounge room, my daughter (who's ten)engrossed in a book called "Zom-B City", while my son (12) seeked vengeance in fifteenth Century Venice playing "Assassin's Creed II".

I clamped the jaws of the pliers gently onto the bent steel rod and applied some gentle force. The rod straightened a little. I pressed the tab set key. Not much happened.

"Very well, if you insist, Mein Herr", I thought to myself as I reattached the pliers and twisted a little harder. The rod looked straight now. I pressed the tab setting key again and it pushed against one of the pins. I pressed the tab clearing key and the opposite rod pushed the pin from the opposite side.
I lifted up the machine, held the back of it firmly and pressed down on the space bar. And the carriage clicked along.
Success!!! 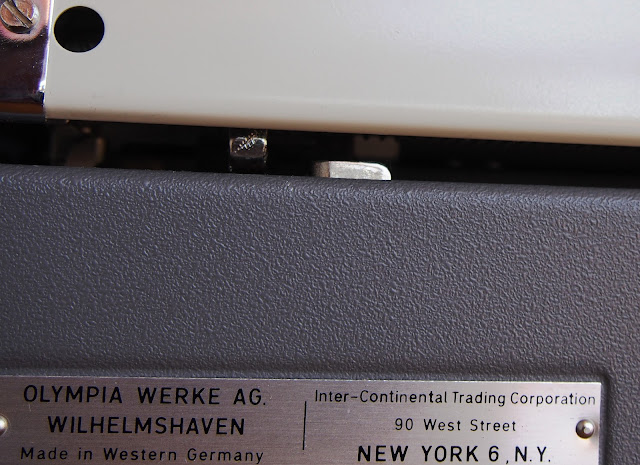 That rod on the left bears the scars of my Leatherman pliers. This typewriter is now truly mine.

I put the case back together, fed a sheet of paper into the platen, and started typing. First paragraph, twelve lines long, no problem.
Next paragraph, two lines in and I got to the end of the right-hand margin and the typeslugs kept hitting the same spot on the page. I hit the Margin Release key and kept writing. Heard the bell at the end of the line and typed a few more letters. And then the typeslugs stopped half-way.  As they should until I hit the Margin Release key. I kept writing and got to the end of another paragraph thirteen lines long.
Started another paragraph and had the same problem on almost every line. The typeslugs wouldn't brake before hitting the page at the end of a line.
Screwdriver time again. But first I had a look at the underside again. There are two steel strips that rest against each other. When you press the Margin Release key, one of these bars lifts out of the way to allow you to type almost right to the edge of the platen. Closer inspection showed that one strip was sitting slightly low compared to the one next to it. I reached for the Leatherman tool.

A light twist and it's now sitting flush against the other piece. Now, when I reach the end of the line, the typeslugs lock halfway until I hit the Margin Release key. 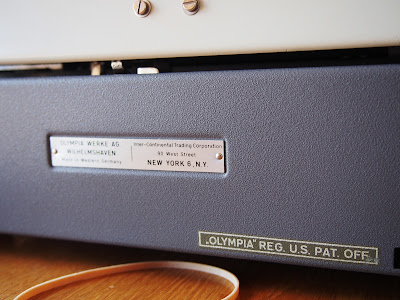 Paint job's pretty clean. I think that scratch on the lower-right decal may be the only cosmetic flaw. 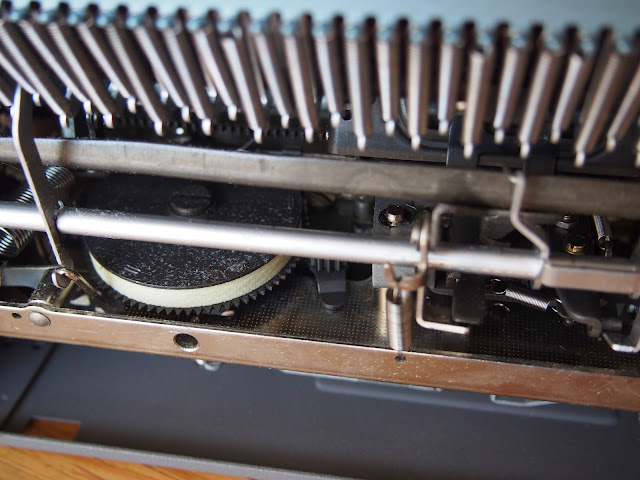 Main-spring drum has some dust on it, but the draw-band is clean. 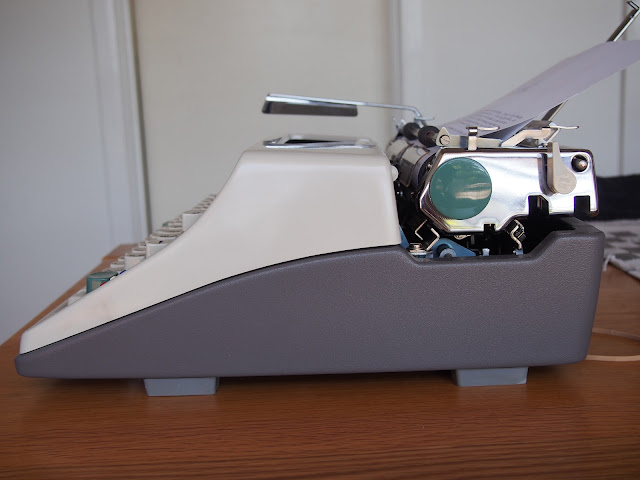 Obligatory profile shot. I would say that this looks "Mad Men-esque", but everybody's an expert on that show these days. Great mid-Sixties design. Again, I'm hoping it's a '66 model. If anyone has a firmer date based on the serial number (3155257), please let me know.

This typewriter has a nice , snappy action. Very responsive, with no sluggishness to the keys. I have to say that Olympia is fast becoming my favourite brand, based on how built-to-last these machines are. Actually, it's pretty much neck-and-neck with Smith-Corona. 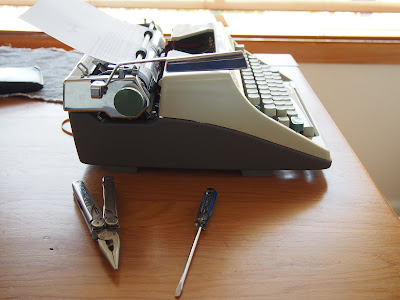 Sometimes, all you need is a Leatherman and a Toledo screwdriver. EDIT (Apr 6th, 2013);
Tidied up some spelling and grammatical errors. Serves me right for writing this post till midnight. Date of manufacture pinned down to late 1966, based on serial number.
Special thanks to Richard P. and The Reverend Ted Munk!
Posted by teeritz at 05:32