Classic Wristwatch Ads...Ruined By Me

Back in the 1960s, the Rolex wristwatch company ran a series of magazine advertisements that could be found in publications such as TIME Magazine and National Geographic. These were highly atmospheric ads and they did much to help elevate the Rolex brand as the aspirational choice of the urban professional male of the time. 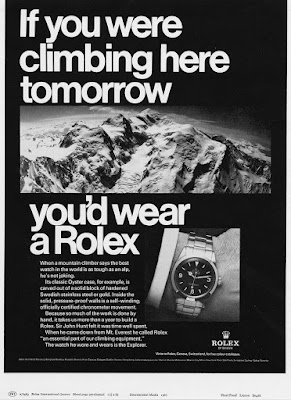 As well as appealing to scuba divers and mountain climbing enthusiasts, Rolex also pitched itself towards men (mostly) who worked in such varied fields as aviation, oil & gas exploration and those who served in the armed forces. Rolex watches had a deserved reputation for being robust and accurate timepieces and it seemed only natural that they would appeal to men who worked in adverse conditions, despite their hefty (for the time) prices.
Which brings me to the advertisement below.

Over on a watch forum that I frequent, one of the regular members was torn between getting himself a Rolex Submariner dive watch and an Omega Speedmaster Professional chronograph. He really loved the whole Moon-landing association of the Speedmaster and the classic design and rock-solid movement of the watch. However, he was also drawn to the classic Submariner. He grew up in a 'Navy town' and often saw officers walking the streets wearing Rolex's classic dive watch, and it also reminded him of his Father's generation, a few of whom served in the Navy.
Also, this famous Rolex advertisement resonated strongly for him and had proven very persuasive. So, he posted a thread on the Omega forum to ask the advice of other members. I had the Rolex ad saved in my computer and it is very atmospheric, exuding a strong and masculine image. 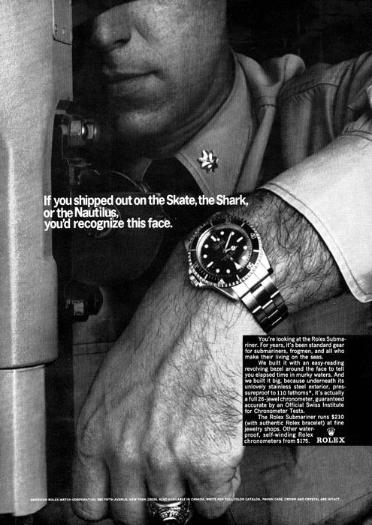 It's a difficult image to argue with. The man's face is half obscured, but you can easily see his mouth, with its world-weary half-smirk. This guy is nobody's fool. His collar has a shiny (cloverleaf?) badge on it and he's wearing one of those cool US Navy insignia rings on his hand which is casually draped over the handle-bar of the periscope of HIS submarine. The bold, white copy in the ad speaks to those in the know, those who have served on board one these vessels of war. This guy is dependable, with nerves of steel. This guy has seen it all. This guy wears a Rolex Submariner on a beefy, hirsute wrist.
Hard to argue with an ad like this. I'd follow this guy into Hell itself.

So anyway, the fella on the watch forum needed the opinions of his peers. And then I had an idea. But I didn't have a Submarine. Oh no. I had the next best thing. I had a coffee machine. I also had a white shirt and a collection of Omega Speedmaster badges.
And I had an Omega Speedmaster Professional. A lot like the one worn by the Apollo 11 astronauts when they landed on the Moon in 1969.

So, I set up the shot, put on the watch and shirt, and handed the digital camera to my son. 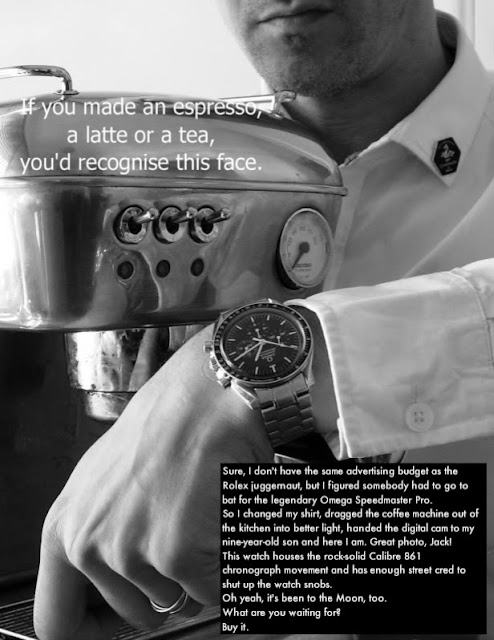 Now, I never shipped out on the Skate, Shark or Nautilus. Nope. But I did do 22 years in the hospitality industry, much of that behind a coffee machine. So the group handle would be my version of the periscope handle.
I spent ages trying to match the angle of my girly hand to that of the Submarine captain's. I may have had slightly (and I DO mean slightly) better luck with the sneer as I curled the left side of my mouth a little. I can look world-weary too, you know.

A bit of fidlling around on Photobucket to copy the layout of the Rolex advert and I was done.

In the end, he wound up buying the Rolex. But he still wants a Speedmaster.

Of course, I had a bit of fun doing that ad, so it wasn't long before I started work on another.
On the watch forum, somebody will usually post up a picture on Friday of the watch they've worn that day. Other forum members will then chime in with pictures of their own watches and the thread will run for a day or two.
I was a regular contributor, but would often take a picture of my watch in a particular setting, rather than just clamped around my wrist. After selling watches for twelve years, I've seen enough wrists to last a lifetime.
So, I did another Rolex advertisement rip-off. Although with this one, I decided to make it more like the kind of ad that companies tend to do whereby they target a certain occupation. I spent longer than I should have on the copy.
And I used a different watch. Then one day, I got to thinking about my recently purchased new smartphone, and how I didn't want to let it run my life. This one took me a while to align the writing and I wound up cropping it a little too close. 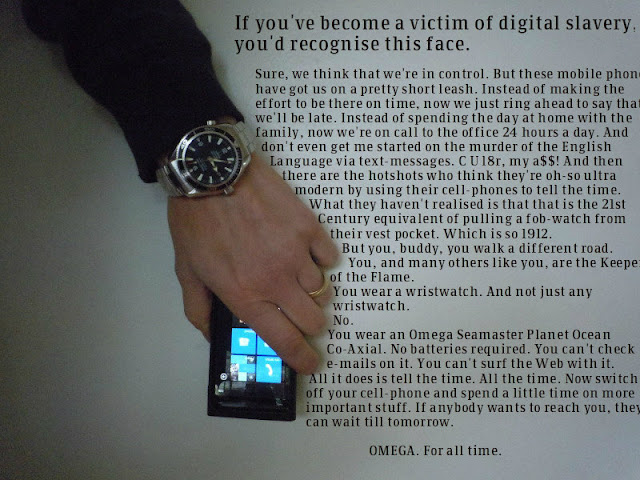 But naturally, sooner or later, technology would let me down. And, of course, I had to vent about it. 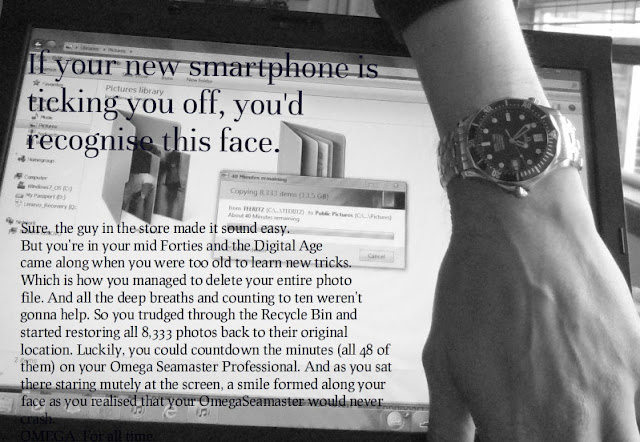 These next two were more to do with how I was feeling about my retail 'career'. It wasn't the customers that bugged me. They were fine, and I learned long ago how not to let the bad ones get to me. Nope, I was sick of the companies that I was working for. I worked for a high-end wristwatch boutique for just over ten years and I had had enough. So I quit (this is already documented here someplace) and went to work for a family-owned jewellery chain that was a ten minute drive from my house. 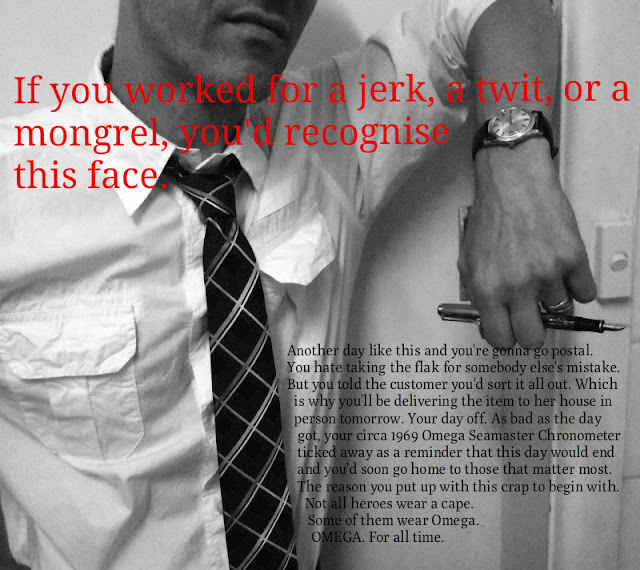 It wasn't long before I realised that the new job was a real case of 'out of the frying pan, into the fire'. And the flames were beginning to tingle a little.
I had given serious thought to a career change and, after my Mother died last April, I figured it was the right time to start keeping busy and try some new challenges, like returning to study at this stage of my life.
Of course, it took a few more bad days at work to really convince me to hustle my butt out of there.

This next one was at the end of a week where my children's days at school were leaving a lot to be desired. I wrote a letter to the school principal regarding the bullying situation and got a reply made up of teacher-speak regarding 'strategies in place' and 'we take these instances seriously' and 'all staff are made aware of the situation', etc, etc.  But whatever 'strategies' they had 'in place', they weren't working. ﻿ 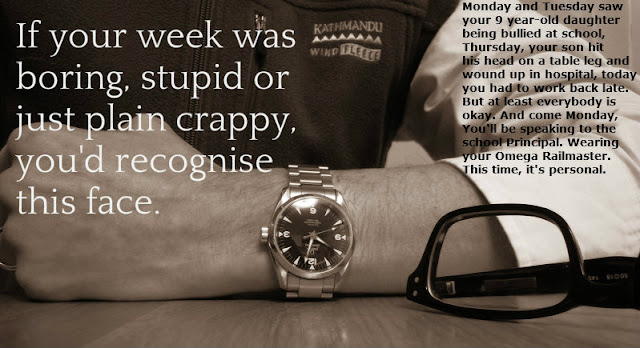 Her Ladyship (the cat) managed to somehow cut her hind leg on something, so it was off to the vet. Sometimes, a cup of coffee makes everything better. 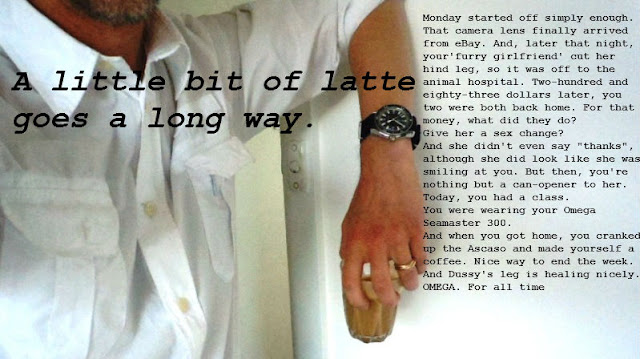 And that's it. Life has been a little hectic in recent months and I have channelled my energies into other things, but I'm sure there will be instances that occur which will inspire me to put together more of these ads.
Actually, I think I got an idea for another one, but it's just hit 9:01pm and I need daylight to take the kind of photo that I'd like for it.
I'll get onto it soonish.